Scalded skin syndrome is a delicate disease that usually affects children under 6 years of age. It must be diagnosed and treated early to avoid a fatal outcome. 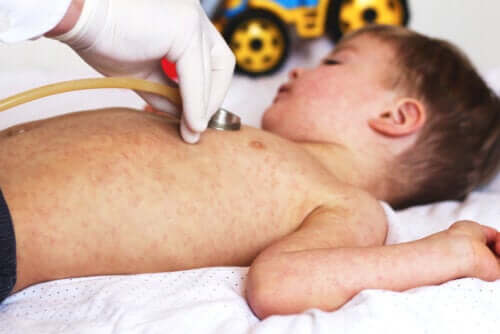 Scalded skin syndrome is a skin condition that occurs as a reaction to a staphylococcal skin infection. Its main characteristic is the formation of blisters and subsequent detachment of the skin.

This problem mostly affects infants or children under 6 years of age. In fact, it’s very rare for scalded skin syndrome to occur in adults unless there’s an immune system deficiency or kidney failure.

These microorganisms secrete a toxic substance that affects the skin causing the upper layer of the epidermis to separate from the rest of the skin. As a result, the blisters burst and the skin looks scalded.

Most commonly, the individual has an initial infectious focus that goes unnoticed. Once it starts, scalded skin syndrome develops rapidly. However, sometimes this happens several days after the initial infection that gives rise to it.

This syndrome is contagious. Staphylococcal infections have increased worldwide since the 1970s. According to estimates, staphylococcus aureus is present in 30-50% of healthy adults.

What are the characteristic symptoms?

Although scalded skin syndrome has several characteristic symptoms, it’s common for each child to experience them differently. Most commonly, the first manifestation is fever, accompanied by a reddening of the skin.

It usually begins with an isolated ulcer that crusts over. In newborns, the sore usually appears in the diaper area or near the navel stump. At the same time, in older children, it’s almost always on the face. In adults, it can begin on any part of the body.

You may also be interested in: Types of Skin Rash and Their Causes

The ulcer evolves and within 24 hours becomes scarlet red in color. Shortly after, fluid-filled blisters begin to form. These break very easily and leave the skin moist and scalded in appearance, as if a burn had occurred. Other common symptoms include the following:

What treatment is available for this syndrome?

The diagnosis of scalded skin syndrome is made on the basis of the clinical picture and the detection of the toxin. Sometimes a skin biopsy is necessary to confirm the disease, which in its early manifestations is very similar to scarlet fever, erythema multiforme, Kawasaki disease, and others.

Once the doctor confirms diagnosis, treatment usually has to take place in the hospital. The management of this disease is similar to that of burns and, in fact, it usually occurs in the burn unit. Most commonly, professionals use the following measures:

Treatment may vary, depending on the patient’s age, general health condition, the severity of the condition, tolerance to drugs, expectations, or preferences. Most commonly, the skin begins to heal 10 days after starting treatment.

Find out: The Causes of Ingrown Hair and its Removal

How to deal with scalded skin syndrome?

In general, if the child or adult receives timely treatment, no complications arise. The most important risk is that a deeper skin infection may develop: cellulitis. There’s also concern that the infectious condition may worsen and reach the bloodstream, causing septicemia.

At the same time, patients run the risk of dehydration or electrolyte imbalance. Likewise, fever requires adequate control, especially in infants. However, if the child or adult receives early diagnosis and treatment, the outcome is usually favorable. On the contrary, scalded skin syndrome can lead to death if the patient doesn’t receive proper treatment.

In conclusion, in the presence of fever-producing blisters and/or the other symptoms we mentioned above, you should see a doctor immediately.

Shingles Symptoms and Diagnosis Facts to Know
Shingles symptoms include inflammation and the appearance of blister-like eruptions. These eruptions are usually found along the affected nerve. Read more »
Link copied!
Interesting Articles
Illnesses
Can Celiac Disease Cause Infertility?