Steam and hot water burns can have different degrees of severity. When should you go to the doctor? How can you avoid complications? 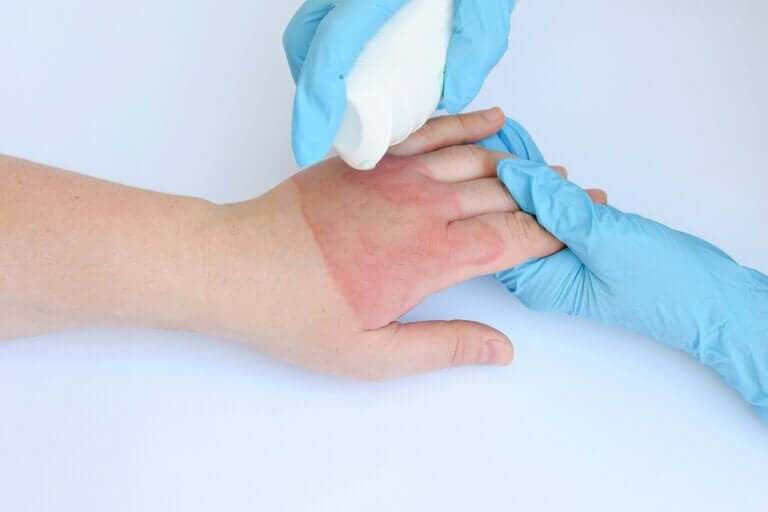 Steam and hot water burns, also known as “scalds,” are one of the most common accidents that can happen in your home. At first glance, they don’t seem to affect the tissue much; however, they can cause serious damage. Because of that, it’s important to know how to treat them.

When we think of burns, we usually think about burns from a flame. However, as the Centers for Disease Control and Prevent shares, between 33% ad 58% of all patients hospitalized for burns are there because of scalds.

Generally speaking, there are different types of burns depending on their depth. They can range from what’s known as a first-degree burn to a third-degree burn, the latter being the most severe level. At that level, deep tissues such as muscles and nerves can be affected.

How do steam and hot water burns occur?

Most scalds happen at home while doing everyday tasks. When water reaches its boiling point, it turns into steam. When that happens, the particles become smaller, but they maintain a temperature of around 212 degrees Fahrenheit.

Therefore, both hot water and steam are capable of causing severe burns. In fact, according to the Spanish Association of Pediatrics, hot water at 140 degrees Fahrenheit can cause a third-degree burn on a child, in just 3 seconds.

Burns often occur when we’re cooking food. In particular, they tend to happen we’re using everyday objects such as kettles, steamers, or pressure cookers. Since water expands when it turns into steam, that steam is usually under a lot of pressure inside of its container. As a result, the damage to the skin’s tissue is even greater.

The CDC states that the arms and hands are most affected by scalds, with 42% of accidents occurring on these body parts. Feet and legs are next on the list. These are the result of spills that can occur involving hot liquids.

The symptoms caused by this type of burn can vary according to the burn’s depth. In all cases, you’ll experience pain or burning in the affected area. This is the result of the direct damage to the tissue that came into contact with the water or steam.

When dealing with a first-degree burn, in addition to the burning pain, the affected area will get red and maybe experience swelling. In these cases, only the superficial layer of the skin is affected, so the damage is minimal.

On the other hand, if the hot water or steam caused a second-degree burn, you will see blisters or sores appearing on the affected area. This is because the heat penetrated the deeper layers of the skin, causing the skin to separate as a form of defense.

Lastly, in the case of third-degree burns, you’ll see blisters and areas where deep tissue is exposed. In addition, use of the affected area may be limited due to nerve fiber damage.

Due to the frequency of steam and hot water burns, it’s important to know how to treat them and what to do when they happen. Immediately taking appropriate action can limit the damage and prevent complications. So, what should you keep in mind?

Keep the person away from the heat source

The first thing to do when dealing with any type of burn is to get the person away from the heat source and put them in a safe place. This will keep other areas of the body safe that weren’t affected.

Once the person is safe, start cooling the wound. To do this, it’s best to immerse the affected area in room-temperature water for 20 minutes. This will cool the tissue and prevent the burn from getting worse. You should not apply ice under any circumstances, as the cold can cause more damage.

After cooling the wound, be sure to remove any clothing or jewelry that’s in contact with the affected area. To do so, it’s often best to cut the garment to avoid further harm to the affected person. However, if the clothing is adhering to the skin for any reason, you shouldn’t remove it.

After removing all clothing items, it’s advisable to moisten a sterile gauze, or cloth, and cover the affected surface. If the burned area isn’t very large, you can use a bandage that won’t compress the limb as much, and this will provide greater protection.

At that point, if the pain is severe, you can use analgesics such as paracetamol or ibuprofen to decrease the pain. When it comes to extensive burns, the body’s temperature may drop. As a result, it’s important to keep the body at a normal temperature.

Don’t pop blisters or apply substances to the burn

You shouldn’t pop the blisters on the affected area under any circumstances. If really necessary, this procedure should only be performed by medical personnel. Draining blisters results in a high risk of infection and injury complications.

Also, you shouldn’t apply toothpaste, coffee, butter, or any other substance to the affected area, since doing so can cause a bacterial infection. In addition, you should only use creams or ointments under strict medical supervision.

Read also: How to Treat Burns with Home Remedies

When to go to the doctor?

In most cases, steam and hot water burns will result in first or second-degree burns. Therefore, medical assistance isn’t usually necessary. In those cases, you should be able to make a successful recovery following the recommendations we mentioned above.

However, you should see a doctor immediately if the affected area is very large or if it’s a third-degree burn. These burns are serious, especially in children, and can put a person’s life at risk.

Here are other situations in which you should see a doctor for burns:

Various studies show that between 30% and 40% of patients with scalds are under the age of 15. For these cases, it’s always best to call the emergency services. This is because children tend to be less resistant to the type of injury and may be more affected than an adult would be.

Be careful with kids

Unfortunately, children are among the most seriously affected by steam and hot water burns. This could be the result of their curious nature. That’s why it’s vitally important to keep kids out of the kitchen, especially when you’re making food. This simple act can prevent a lot of accidents.

In addition, it’s important to be careful when bathing children. The water temperature shouldn’t exceed 122 degrees Fahrenheit. Keep in mind that children’s skin is much more sensitive and that they’re prone to serious injury, even if only exposed for a short time.

How to Use Baking Soda for Burns
Many people are exposed to some kind of burn almost every day. Today, we'll take a look at several ways to use baking soda for burns. Read more »
Link copied!
Interesting Articles
First aid
Accidents and First Aid for Older Adults

First aid
How to Remove a Fishbone Stuck in Your Throat

The consumption of fish can be risky, as there's always the possibility of getting a fishbone stuck in the throat.…