Types of Skin Rash and Their Causes

There are many types of skin rash. Therefore, they're due to many different causes, such as genetics, infections, allergies, and environmental factors, among others. As you can imagine, treatment largely depends on the cause. 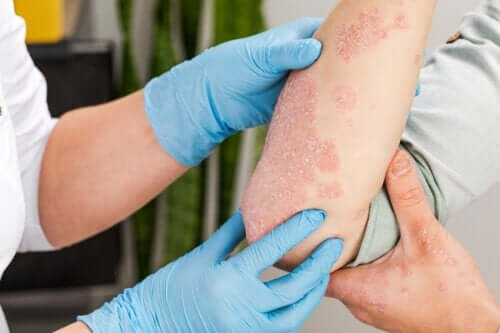 There are many types of skin rash. These are also known as “efflorescence,” which is basically a term doctors use for any cutaneous lesion. In other words, it refers to a change in the epidermis that affects the color, appearance, shape, or texture of the skin in any part of the body.

Epidemiological studies indicate that the prevalence of a disease that causes skin rashes or atopic dermatitis is about 15-30% of children in high-income countries. This means that dermal conditions are on the rise.

The skin is the first barrier -together with saliva, tears, and mucous membranes- that protects us from foreign pathogens. Thus, you must take into account any damaging processes. Today’s article provides helpful information about the types of skin rash and their causes.

The definition of the term skin rash encompasses many conditions. According to the Mayo Clinic, these are the most common types.

These are just some examples of skin rashes but there are many more: ringworm, rosacea, and shingles, caused by herpes zoster. Doctors still don’t know the causes of this group of conditions.

According to the U.S. National Library of Medicine, simple skin rashes (contact dermatitis in particular) are caused by touching things that damage the skin — chemicals, cosmetics, dyes, and some toxic plants.

Similarly, other types of rashes are caused by a viral, fungal, or bacterial intra-epidermal invasion. An example of this is impetigo in children, caused by the bacterium Streptococcus pyogenes.

It can also be due to microorganisms such as ringworm or dermatophytes. These settle as fungal colonies on the skin and feed on keratin, causing damage at the skin level. Also, many skin rashes are due to allergies.

Guidelines for caring for the various types of skin rash

Treatment depends largely on the causal agent of course. Ringworm requires antifungals; shingles, vaccines and antivirals, and impetigo, antibiotic ointments. The nature of the invading pathogen will determine the protocol to follow in each case. Thus, self-medication is out of the question.

Also, there’s no cure for chronic diseases such as atopic dermatitis or psoriasis. In these cases, the American Academy of Asthma and Immunology indicates the following:

In general, a 1% hydrocortisone cream effectively treats redness, swelling, and pain. This family of drugs is often available without a prescription.

When to see a doctor

Some types of skin rashes resolve without the need for specific treatment. However, consult a doctor if there are other symptoms such as joint pain, difficulty breathing, swollen face, overly sensitive and painful areas, or redness lines.

As we mentioned above, many skin rashes are due to chronic disorders that don’t represent a major problem — such as dermatitis. Unfortunately, the solution isn’t as simple in cases in which the trigger is viral, fungal, or bacterial and requires immediate treatment.

Things to remember about rashes

A rash can be due to heredity, infections, environmental conditions, allergies, and many other factors — or a combination of several.

In general, it’s a good idea to consult a doctor if you have any questions or concerns. Remember, this is a condition with many underlying causes so never self-medicate.

Only a professional can evaluate your skin rash and determine which therapeutic options are appropriate according to your particular case. Also, they can instruct you on other things you can do to prevent any complications.

10 Causes and Types of Skin Rashes
The different types of skin rashes cause skin inflammation and irritation of the skin. However, there are differences between the clinical manifestations. Read more »
Link copied!
Interesting Articles
Illnesses
Eczema and Stress: How Are They Related?