The Sad Story of a Woman Exhibited for Her Large Buttocks

In 1984, Nelson Mandela petitioned for the remains of the young woman to be returned to Africa in order to give her a decent burial. 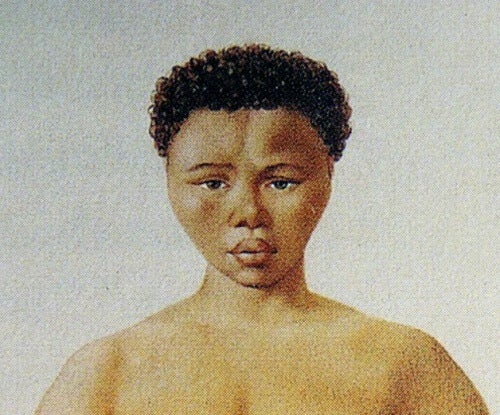 This story took place in the nineteenth century, at the time of unreason, when slavery engraved pitiful stories. It’s the sad story of a woman exhibited on public display due a genetic abnormality. Her name was Saartjie Baartman.

Saartjie Baartman was 20 years old and preparing for a normal life in her village. She belonged to the African ethnic group of Khoikhoi, people who were accustomed to living off the land, their animals and the deeply entrenched habits of their religion.

This young woman knew nothing of what was beyond the horizon of her beautiful land of Africa, a continent long attacked and humiliated by Europeans.

Her life changed radically the day she was led off by Hendrik Cezar and Alexander Dunlop. They were two Frenchmen who saw in the body of Saartje a feature that would earn them big money.

This young woman suffered from Steatopygia. Which is a very common disease among African tribes such as the Khoisan (foraging San aka Bushmen and the pastoral Khoi previously known as Hottentots) and some Bantu people.

This condition is just an abnormal accumulation of fat in the buttocks. Something that’s also common for all those suffering from morbid obesity. But the case of Saartje was apparently very striking, and these two men saw in this girl a way to get rich by displaying her in London theaters and fairs.

They called her the Black Venus or the “Hottentot Venus”, which referred to the people and ethnicity from which she came. Without really knowing how or why, Saartje found herself on the stages of various theaters in London. She was the woman exhibited for her large buttocks.

The show was both rudimentary and humiliating. She had to stand naked before the audience and simply display her form before all those who attended. Those people looked at her with morbid anticipation.

The audience consisted mostly of men, as we would expect. Gentlemen of different social classes who didn’t hesitate to pay high prices to see the young Hottentot and her large buttocks.

Night after night for four long years, the same episode happened again and again. It was a true psychological torture for this woman who unwittingly and unwillingly became a fairground attraction.

Hope’s Story: Abandoned for Being Accused of Witchcraft

With success came even more torture

The men who enslaved her became rich so fast that they didn’t hesitate to repeat the experience in other cities. So, after four years they went to Paris. Again they had considerable success; the evil, curious and hungry looks for the abnormality of young Saartje, the woman exhibited for her large buttocks.

These men willingly used her for paid public performances but also wanted to use her for private functions. It was here where more people came to look at her and where her “owners” received more money.

Fortunately, they soon heard the voices of abolitionists who saw in the performance an unforgivable humiliation and a depraved act. And so they wanted to ban it immediately. Hendrik Cezar and Alexander Dunlop defended themselves with the simple comment that Saartje acted of her own free will.

And they proved this with the contract she had signed. But this document was written in Dutch, a language that this young woman, of course, didn’t know at all.

The end of a life of misery

Criticism of the spectacle of the Black Venus became more continuous. Therefore, the owners had to shut it down and sell Saartjie. They sold her to a French dealer who wanted to take advantage of the girl’s fame and exert influence over her for a darker and more humiliating prospect.

He organized private shows where he displayed her again, in clubs of the Parisian streets where he forced her into prostitution. All the men who wished to, could have sex with the girl with large buttocks, with the famous Venus Hottentot.

That was how she spent several years. But little by little all this world of misery and unhappiness ended up affecting her health.

It’s unknown what the exact cause of her death was. But it’s not too hard to imagine… syphilis, tuberculosis, pneumonia and of course, sadness. An immense sadness to a life she could never understand.

A woman exhibited even after death

At this point you may think that her life finally came to rest after her death. But it didn’t, not at all. After her death, the body of Saartje was dissected for exhibition, this time at the Musée de l’Homme in Paris.

They exhibited her brain, her genitals and her skeleton. And it stayed there until the 1970s, when they finally decided to preserve that testimony of human cruelty and everything that slavery meant for our society.

The true rest for Saartjie Baartman came when Nelson Mandela, in 1984, petitioned for the remains of this young woman to return to Africa for a proper burial. To finally find the rest and peace she deserved, in that land that had seen her birth and from which she should’ve never left.

The woman exhibited for her large buttocks, or this Black Venus, is another example of the stories that should’ve never happened and that, most certainly, shouldn’t repeat.

There is Always Hope for the Broken Ones
Far from being weak, broken people are strong and have been able to keep moving forward. Though the beautiful part of their life has been in another plane. Read more »
Link copied!
Interesting Articles
Did you know?
New Year's Traditions Around the World