Everyone has resentful people in their lives, but it's usually hard to deal with them and viceversa. 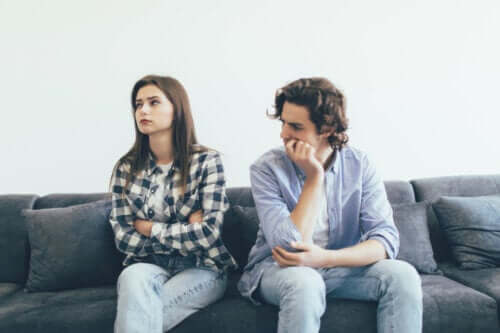 Resentment is a very common negative feeling so there’s a lot of resentful people out there. It happens when people aren’t able to overcome personal conflicts and maintain a defensive attitude even if they are things of the past. In fact, it’s experienced not only by those who can’t forgive but also by those who’ve been abandoned, hurt, or betrayed.

Overly resentful people can have trouble relating to others. In the same way, they tend to end up being unhappy, since they constantly live in the past and cannot move forward. Resentment is a very distressing state that usually becomes chronic.

It’s important to understand that this feeling has a series of functions that are important. It’s not just a negative (and sometimes self-destructive) emotion, since it also plays a vital role in the adaptive process and as a defense mechanism. We’ll tell you a little more about it below.

The adaptive value of resentment

People usually associate resentment with past memories. Memory networks that configure life experience store everything that can be useful at any given time. Both positive and negative information.

In general, for survival, negative or threatening information is stored in a special way in the brain. The objective of this mechanism is to ensure that the person doesn’t re-expose themselves to the damage received.

Humans, like any animal, evolve from adaptation to the environment. And this happens thanks to the fact that memories warn you of which stimuli, be they people or objects, from the environment are convenient and which aren’t. In the case of resentment, it’s negative information.

Resentful people are so as a defense mechanism

Resentful people remember some information and events labeling them as negative in such a way that it’s difficult for them to change them later. Their intention is to protect themselves. So, what happens is it creates a problem when establishing new relationships or letting go of old grudges.

In general, we all use cognitive schemes that help and guide us in different situations, since they offer us information about the stored experience or about our options. Ideally, these schemes should be flexible and continually nurtured, but this isn’t always the case.

In the case of resentful people, it may be a defense mechanism activated by unpleasant experiences with other people. Therefore, their cognitive schemes are more rigid. This implies that these kinds of people will not easily change their minds.

However, this is a very negative habit. Living constantly hating another person is exhausting and can sap anyone’s energy and self-esteem. Resentment hurts more than you think.

Therefore, it’s important to try to find an outlet for that feeling, since in the long term it could cause serious health problems. For example, it’s possible to remember a negative experience so as not to repeat it without such harmful connotations involved.

Although experts can’t propose a pre-established method, they can offer advice to spiteful people who want to make changes in their life.

For example, experts recommend to focus on the present. The past no longer exists and while you recreate it, you may be missing interesting things about the “now”. You must try enjoying what you do at each moment and practice, for example, activities such as mindfulness.

In the same way, communication is also important. If someone has hurt us, it’s best to speak to the person or persons involved. Thus, we’ll feel better and we won’t hold anything back. Trying to be assertive and positive about it while keeping an open mind to possible explanations is helpful.

Resentful people, seek help if you need it

If, despite these recommendations, it’s impossible to stop being spiteful, it’s probably necessary to go to therapy. With the help of a good psychologist, it’ll be easier to externalize and treat unresolved problems and your quality of life will make a comeback to what it was before with the passage of time.

Resentment hurts not only those who experience it, but also those around them. Many of them aren’t to blame for past bad experiences and it’s not fair that they have to pay for them as well. You have to give opportunities to others, but above all, to yourself. The present is too valuable to waste your time thinking about yesterday!

The 4 Most Important Values to Pass on to Your Children
Today, we're going to focus on what we think are the 4 most important values to pass onto children. Want to know what they are? Keep reading! Read more »
Link copied!
Interesting Articles
Sex
Ten Common Questions about Sexuality