Rebecca Syndrome: Jealousy Over Their Ex

Rebecca syndrome refers to the jealousy a person feels towards their lover's exes. How can you recognize it? Why is it important to address it? Continue reading to find out! 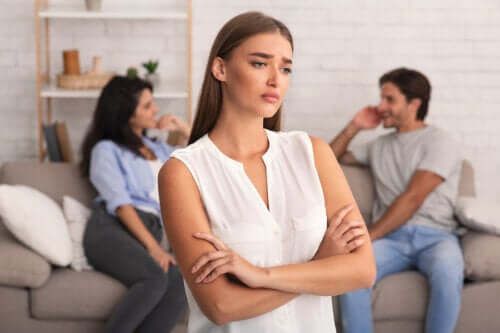 Rebecca Syndrome refers to those situations where a person experiences jealousy towards their significant other’s exes. In fact, this type of feeling is more prevalent these days, according to some psychologists.

It may have many causes, ranging from low self-esteem to a compelling need to compare yourself with others. It may even be caused by a partner in some cases.

Where does the name Rebecca Syndrome come from?

This syndrome bears the name of Alfred Hitchcock’s film “Rebecca,” released in 1940 and based on the novel Rebecca by Daphne du Maurier.

This cult film tells the story of a young lady-in-waiting who has an affair with a widowed millionaire and ends up marrying him. Unfortunately for the new bride, the housekeeper and the rest of the servants of the house (an imposing mansion called Manderley) are hostile to her from the beginning.

The young woman is constantly compared to the former wife. She’s sanctified, glorified, and admired by everyone, and, little by little, the protagonist begins to feel her self-esteem slipping when she begins to compare herself to the nearly perfect image of the deceased woman.

As a result, she begins to develop jealousy for no reason, especially when she discovers that her husband’s relationship with his former wife was anything but happy and peaceful.

What is Rebecca syndrome?

The author Peter Van Sommers exposes his own opinion about this type of jealousy. He classifies it as “retrospective” in his work entitled Jealousy: What Is It and Who feels It. That is to say, provoked by previous relationships of the current significant other.

This is why a person may even be jealous of a deceased ex of their current partner. The Bulgarian writer Elias Canetti also previously uttered an aphorism that fits this description well:

“One would have to classify jealousy according to what one hated most: past, present, and future rivals.”

It’s common for a person with this syndrome to imagine happy situations their significant other experienced with their former lover.

It’s also common for those with this syndrome to assume they’re or were more intelligent, beautiful, or attractive, among other things. That is to say, they think these people were nearly perfect.

This leads jealous people towards a complacent behavior with the other, although the opposite can also happen and they may feel superior. The truth is this situation seriously affects coexistence as a couple, causes conflicts, and can even destroy a relationship.

Do you know What’s Emotional Codependency?

As this study by researchers Scheinkman and Werneck points out, “Jealousy is a complex relational experience. It’s a visceral fear of loss.”

This way of feeling includes thoughts and feelings that cause actions and reactions that sometimes seem incomprehensible.

The situations that increase the possibility of this condition are:

Why Do You Struggle with Jealousy in Your Relationship?

Is there a treatment?

Improving the situation in which irrational fears prevail often involves some kind of intervention, according to Dr. Cuesta. In some cases, it may also be necessary for the partner of those with this syndrome to obtain psychological support.

Some suggestions that may help are:

It’s possible to leave behind the symptoms of jealousy and begin to truly enjoy the relationship in the here and now with the support of a psychologist.

How Jealousy Affects Your Health
Did you know that being jealous can negatively affect your health? In this article, we'll take a look at how jealousy affects your health. Read more »
Link copied!
Interesting Articles
Relationships
How to Put an End to a Toxic Friendship