The Fascinating Lesson of the "Three Wise Monkeys"

You've probably seen the famous image of the three wise monkeys. But did you know the real meaning behind it? 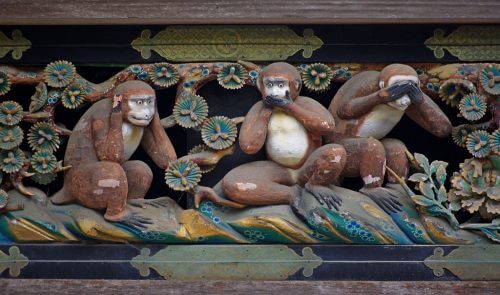 The classic story of the three wise monkeys from the Tōshō-gū shrine has a simple, timeless lesson: we have be careful what we say, hear, and see.

This famous shrine is in Japan. The carvings of the monkeys – one covering his mouth, another his eyes, and the last one his ears –  date back to 1636.

Few images have crossed as many borders and lasted for as many decades as these. Now, the three wise monkeys are are icon. However, the meaning of this image slowly became lost with time.

The Japanese have a philosophic code of cautious conduct:

This is lesson that comes from the writings of Confucius. For many, see it as a message of “surrender.” But many historians see a parallel between the image of the three monkeys and the Socrates’s triple filter test.

This iconic image actually has a much more useful message for our modern life. It has nothing to do with ancient Eastern submissiveness, or not seeing or hearing injustice.

Keep reading to learn more about the lessons to be gained from Socrates and the Three Wise Monkeys.

A disciple came to inform Socrates that someone had been criticizing him.

These three filters are meant to be guides to help us be more prudent, cautious, and critical of everything we say.

Many people see a relationship between this lesson and the three wise monkeys at the Tōshō-gū shrine.

The lesson of the 3 wise monkeys

Let’s take a closer look at this famous image.

The monkey covering his mouth: Iwazaru

Iwazaru is the little monkey that you see on the left.

In Japanese philosophy, this monkey represents the necessity of not spreading evil. There’s also a link with the recommendation to not express your own dissatisfaction or negative feelings.

Prudence is also a part of not letting your own emotional world show too much. It’s about being composed and restrained.

As for how it fits with in with Socrates’ three filters, it has a lot to do with the importance of not gossiping.

That’s because rumors aren’t always true. They aren’t good, and it isn’t always necessary to say them out loud.

The monkey covering his ears: Kikazaru

Kikazaru is the monkey in the middle.

In Japan, people who spread rumors, criticism, or bad news are looked upon very negatively.

So, the Japanese believe it’s better to shield their ears from certain kinds of information to preserve their balance.

This traditional idea may sound a bit wild here in the Western world. After all, bad news, gossip, and criticism are constantly flying all over the place here.

But, you can see some other shades of meaning if you look at it through the lens of Socrates’ three filters:

But if the information is negative and isn’t useful, then it’s time to follow the lesson of Kikazaru: cover your mouth.

The monkey covering his eyes: Mizaru

According to the philosophical and moral code santai, it is better to not see, hear, or speak of injustice. Of course, that idea doesn’t hold up in real life.

But again, if you look at it from the perspective of the Socratic filters, you might notice something. It’s a direct invitation to close our eyes to things that aren’t useful or good.

You close your eyes to darkness to lift your gaze to the brighter, more hopeful, and more meaningful side of things.

In the end, the three wise monkeys teach an important lesson about our needs and the importance of being cautious and prudent, especially when it comes to harmful or negative thoughts.

The Ancient Legend of the Red Thread
Have you ever heard about the legend of the red thread? It says that everyone is linked to the love of their life by a red string. Learn more about it here! Read more »
Link copied!
Interesting Articles
Relationships
What to Do if Your Partner Is Verbally Abusive