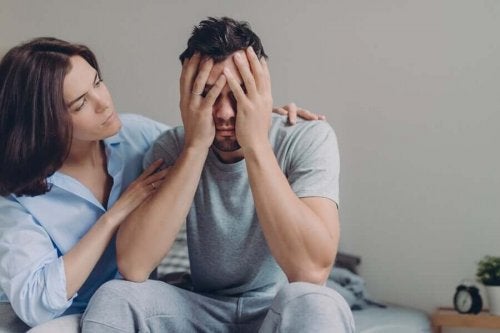 Post-orgasmic illness syndrome is a rare, recently discovered disorder that only affects men. It causes flu-like symptoms after ejaculating.

According to the International Society for Sexual Medicine, there’s no report on how widespread post-orgasmic disease syndrome (POIS) is. This is because the first cases only started to be reported a few years ago.

However, experts estimate that many may suffer from it without even knowing it, as few people are aware that it exists. In fact, Marcel Wandinger, director of the Department of Psychiatry and Neurosexology at the Hague Leyenburg Hospital in the Netherlands only first discovered this disease in 2002.

Although this disease isn’t a major health hazard, it’s very problematic for the emotional stability of the sufferer and his partner. This is because it reduces the sexual desire of those who suffer from it, as they consider orgasms the prelude to discomfort, instead of pleasant.

The manifestations of POIS may begin to be felt immediately after ejaculation or may appear hours later. The symptoms can last three to seven days.

Experts have detected two types of symptoms that coexist but, depending on the case, some prevail over others:

This article may also interest you: 11 Causes of Pain During Sexual Intercourse

Next, this theory considers an abnormal response to oxytocin release after orgasm. Also, other studies have tried to establish a relationship between low testosterone levels and POIS. This is because some symptoms, such as fatigue and difficulty concentrating, are common.

Immediately after orgasm, prolactin levels increase and remain elevated for a long period. Therefore, a new theory considers that prolactin can alter dopaminergic neurons, which would cause insufficient dopamine production. Overall, this theory is based on the fact that a lack of dopamine produces psychological symptoms similar to those of POIS.

Also, a more recent theory considers that the body may trigger an autoimmune reaction when it produces semen. Studies by Dr. Marcel Wendinger on 45 men showed evidence of this possibility.

Thus far, antihistamines, SSRI antidepressants, and anxiolytics have been used to relieve symptoms, but they’re not definitive solutions.

Dr. Waldinger experimented with hyposensitization therapy. This therapy consists of inoculating patients with their own semen. The therapy works as a kind of vaccine that seeks to provoke an immune reaction to a semen allergy.

Hyposensitization has reported a gradual improvement in symptoms. However, it hasn’t been sufficiently tested and the tests haven’t yielded enough conclusive evidence.

Medical professionals have tried other treatments that have succeeded in relieving some symptoms. Also, there are natural therapies such as treatments based on Saw palmetto and vitamin B3. More extreme methods have also been used, such as prostate reduction or the application of techniques to prevent ejaculation.

Support groups facilitate the exchange of experiences and the connection with professionals who are studying this condition. If you or someone you know may suffer from this disease, they’re a great place to find support and get help. There’s a forum where interested people can register at and a Facebook page they can follow.

In any case, it’s best to consult your doctor or a specialist who can help you.

Peegasm: A Harmful Orgasm
There are many ways to experience sexual pleasure, but peegasm, the latest in orgasm fads, is one of the strangest. Not only that but it's also bad for your health. Read more »
Link copied!
Interesting Articles
Sex
9 Factors that Can Decrease Sexual Desire