The Incredible Physiology of the Large Intestine

As we dive into the physiology of the large intestine, remember that we're only talking about the final section of the digestive tract. 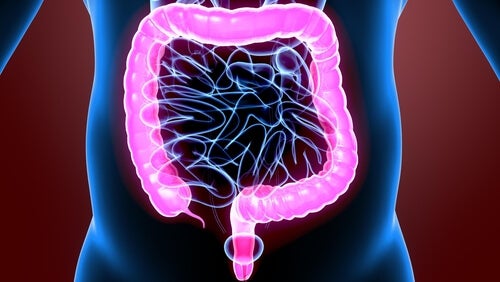 First, the proximal large intestine is responsible for absorbing water and electrolytes. Next, the distal intestine stores fecal matter until its expulsion.

These functions don’t require the colon’s movements to be as intense as the small intestines. In fact, these movements are slow and gentle.

As a result, the colon’s movements are similar to the movements of the small intestine.

In this article, we’ll take a look at everything you need to know about this amazing part of the body.

Fruits and Herbs to Soothe Digestion

The Physiology of the Large Intestine

Like what happens in the small intestine, bowel movements can be split up into mixed and propulsion movements.

These are a combined contraction of the colon’s circular muscle and longitudinal muscle. This pushes the non-stimulated part of the colon outwards.

Minutes after, the process repeats itself a little further, pushing the fecal matter farther along the large intestine. By pushing in this manner, all of the fecal matter stays exposed on the intestinal wall, facilitating hydro-electrolyte absorption.

Propulsion movements depend on “mass movements”. These movements are a modified form of peristalsis , or contractions, that unify the movements of the colon.

They push the fecal matter forward. Mass movements usually occur three times a day and last about 30 minutes each time.

Mass movements react as a response to the distension of the stomach. At other times, they might act in response to irritation.

An example of a case of irritation is such as what happens in the cases of patients with ulcerative colitis.

The Role of the Ileocecal Valve

The ileocecal valve prevents waste from flowing back to the ileum once it’s reached the colon.

In addition, the reflexes of the cecum control the movements in the ileum, aiding to prevent back flow. When the walls of the cecum distend, it sends out signals that increase the contractions in the sphincter and inhibits the intestinal peristalsis.

What happens if these processes change?

The defecation reflex gives rise to the expulsion of feces.

When feces reaches the rectum, it signals the walls to distend, which sends afferent signals through the myenteric plexus. As a response to the signals, peristaltic waves flow from the colon downwards towards the rectum. By doing so, they push out fecal matter from the anus.

One kind of mucus makes up the secretion.

The mucus secretion has three functions. It:

You didn’t know? 8 Signs that Something Is Wrong with Your Intestines

The large intestine receives around 1500 mL of chyme each day. It mainly absorbs most of the water and electrolytes that it contains in the proximal colon.

As a result, the eliminated feces only contain around 100 mL of water and anywhere between 1 and 5 mEq of sodium and chlorine ions.

How does the large intestine absorb substances?

The intestine uses active transport to absorb potassium, along with other ions such as calcium or magnesium, as well.

The unions between the cells of the large intestine are much narrower than those in other sections of the digestive tract. As a result, they prevent retrograde diffusion of the ions and thus allow for more sodium absorption.

Aldosterone is a big aid in sodium absorption. The resulting concentration gradient allows water to be absorbed through osmosis.

Isn’t it incredible how the body works?

How to Cook Vegetables That Taste Delicious Every Time
Creativity and knowledge: now that's a recipe for making appetizing, tasty vegetables. Not sure how to cook vegetables that actually taste as great as they make you feel? Don't worry. There are endless options for serving vegetables, too.  Read more »
Link copied!
Interesting Articles
Anatomy and physiology
Twelve Exercises to Overcome Shoulder Tendinitis