Physical inactivity in children is a problem that has been gradually increasing in the Western world. Today, there are more sedentary than active children. 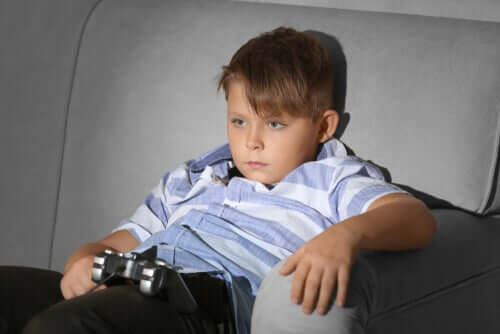 Physical inactivity in children is a growing problem in almost all parts of the world. In fact, it’s even been classified as an epidemic. This situation has occurred due to multiple factors and is also a potential trigger for future health problems.

A recent World Health Organization report stated that about 70% of boys and up to 88% of girls under the age of 10 don’t get the physical activity they need for their age. This means that physical inactivity affects an average of 79% of children.

Physical activity plays a key role in health at all ages of life. However, during childhood, it’s an essential factor for normal development. For that reason, there’s a lot of concern in the medical sector due to the gradual increase in physical inactivity in children. In this article, we’ll take a closer look at this widespread epidemic.

The word “sedentary” comes from the Latin root “sedentarĭus”, which means “to sit”. Physical inactivity is defined in many ways. Nevertheless, one of the most accepted is the one that states that a person is considered to be sedentary if they burn less than 150 kilocalories a day in moderate-intensity physical activity.

In the case of physical inactivity in children, the World Health Organization (WHO) has stated that a child is sedentary if they do less than 60 minutes of physical activity a day. Several studies indicate that the vast majority of Western children don’t reach the quota of daily activity.

The worst part of all is that physical inactivity in childhood is often accompanied by other harmful factors, such as inadequate nutrition. This combination creates the conditions for there to be more obese children than ever, with all the consequences this entails.

Movement during childhood is a decisive factor in psychomotor development. Likewise, movement is what allows children to discover themselves and the world. This, in turn, strongly influences their intellectual and psychosocial development.

Why is physical activity in children so common nowadays? These are some of the factors that foster it:

The effects of physical inactivity in children

Physical inactivity in children has negative consequences and some of them have long-term effects. Among other problems, the most important are:

Find out more here: The Risks of a Sedentary Lifestyle on Your Heart

It isn’t an exaggeration to say that physical inactivity can significantly harm a person’s life. If children don’t develop the normal physical and intellectual skills consistent with their age, they’re building a life with serious limitations. Also, if problems such as excess weight or obesity appear, there’s a serious risk of chronic diseases.

Adults must provide children with physical activity options. Both parents and teachers play an essential role in this. You can fight a sedentary lifestyle with lifestyle changes. Children naturally feel inclined to do physical activity and their early years are crucial in this. Thus, adults should commit to supporting their children in their desire to explore the world by moving, playing with other children, and coming into contact with nature.

A Sedentary Lifestyle – Do You Need to Go to the Gym?
According to some data on physical inactivity, 36.8% of the population leads a sedentary lifestyle and doesn't move enough. Read more »