Phantosmia: How Do Olfactory Hallucinations Occur?

Do you often smell burning or garbage? There's an olfactory disorder that makes us experience smells that don't really exist. We'll look at what causes these olfactory hallucinations, which seem to be experienced mostly by women. 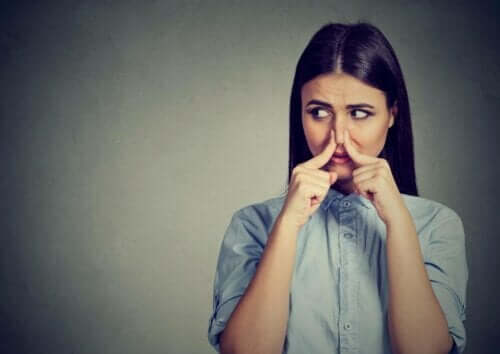 Rotten food or a burnt bread smell. A stench of chemicals or tobacco smoke. Phantosmia is a smell alteration that makes us perceive smells that aren’t actually there. In other words, olfactory stimuli that don’t exist. It’s the brain causing us to experience olfactory hallucinations.

People who suffer from this disorder aren’t losing their minds or living with any psychiatric condition. They know very well that what they’re feeling isn’t real and that’s why they’re so confused. It’s important to note that this phenomenon isn’t all that uncommon. In fact, there are many who, upon reaching a certain age, begin to report this curious alteration.

These olfactory hallucinations appear around the age of 40 and become more intense as we get older. Likewise, the demographic evidence regarding its incidence tells us that it’s much more common in women. We’ll take a closer look below.

The perception of odors that don’t exist can become limiting, as phantosmia is an unpleasant experience. The person suddenly senses smelly and annoying odors that invade their everyday lives. And, as surprising as it may seem, 1 in 15 people over the age of 40 suffers from this phenomenon.

Studies, such as those carried out at the University of Vermont and the National Institutes of Health in Maryland, reveal that it’s more prevalent in women. This is especially true when they belong to more disadvantaged environments. Likewise, it also seems to correlate with other realities that we’ll analyze below.

You may also be interested: 5 Tricks to Remove Fish Smell from Your Kitchen

We can distinguish two types of phantosmia: Peripheral phantosmia and central phantosmia. The first appears when the origin of the alteration is in the nasal cavities. On the other hand, central phantosmia is a little more complex, since it’s due to a trigger in the brain. In the latter case, there’s greater persistence and, therefore, it can be extremely problematic.

Dry mouth syndrome or xerostomia appears frequently in people between 50 and 60 years old. It’s characterized by a lack of saliva due to an alteration in the salivary glands.

The consequence of this dysfunction is serious because something like this involves the irritation of the hard and soft tissues of the mouth. Therefore, it increases the presence of bacteria and the risk of oral and dental diseases. Likewise, another possible associated effect is phantosmia.

We all know that tobacco addiction is harmful. However, sometimes we neglect the impact that the dependence on cigarettes can have on our senses. For example, heavy smoking affects the senses of taste and smell.

Not only do heavy smokers lose the ability to distinguish smells and tastes. In addition, these smells and tastes are also altered. In other words, what we eat doesn’t taste the same and sometimes we experience bad smells without any specific stimulus. The good news is that, if we stop smoking, these effects disappear.

Migraines with aura have a particularity in that they begin with a series of symptoms that anticipate the appearance of the headache. Therefore, among those signs (auras) are visual hallucinations, such as seeing bright lights and experiencing odors that don’t exist (phantosmia).

Rhinitis, both allergic and non-allergic, also has to do with this problem. So, the inflammation of the mucous lining of the nose that causes sneezing, runny nose, nasal itching, and congestion, leads, in many cases, to the alteration of odors.

One relationship that experts have established is the association between phantosmia and environmental pollution. Those people (especially women) who live in environments with a higher level of pollution gradually develop this olfactory disorder. The exact mechanisms that orchestrate the condition aren’t yet known, but it’s a fact that we must take into account.

You may also be interested: 6 Tips to Get Relief From a Stuffy Nose

Among neurological disorders, the alteration of smell is a symptom that appears in numerous diseases. Therefore, it’s always crucial to have an adequate diagnosis:

How to treat phantosmia

Patients with phantosmia suffer from numerous problems in the short term, such as alterations in their appetite. A study by the University of Louisville indicates that we still don’t have a timely and effective treatment to provide a solution.

Therefore, the best thing to do is to go to the doctor as soon as possible to find out what causes phantosmia. It may be migraines, allergies, or Parkinson’s disease. It’s common for the approach to be multidisciplinary and combined with the attention of a neurologist and an otolaryngologist.

Among the treatment that can be prescribed for olfactory hallucinations are antiepileptic, antimigraine, and anticonvulsant medications as well as transcranial stimulation. The most important thing is to personalize the care of each patient and improve, as much as possible, their quality of life.

Sensory Stimulation: Senses That Give Us Sexual Pleasure
Although people tend to focus on physical stimulation,  the fact is there are other senses which are determining factors for increasing sexual arousal. Read more »
Link copied!
Interesting Articles
Illnesses
The Symptoms and Treatment of Granuloma Annulare