Types of Schizophrenia and Their Characteristics

There are various types of schizophrenia. Some can cause hallucinations, others delusions, and some of them even lead to abnormal movements. Today's article will discuss the symptoms that predominate in each one of them. 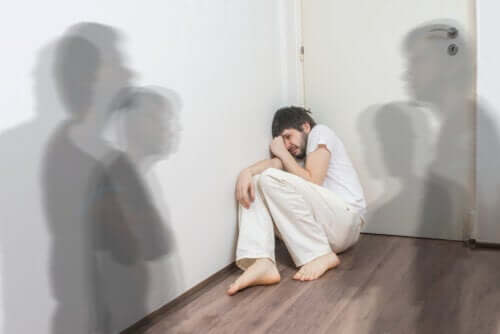 There are various types of schizophrenia. Until recently, this mental disorder used to be divided into subtypes. There are now five different types of the condition differentiated according to the traits that predominate in every type.

There’s are differences in the way of interpreting reality in all of them though: hallucinations, delusions, and variations in behavior and thinking. This disease greatly impacts the lives of those who have it, as well as the people close to them.

It can even be a social risk when patients lose their ability to control their actions. Today’s article will discuss everything you need to know about the various types of schizophrenia and their characteristics.

As we mentioned above, this is a mental disorder that usually appears around the age of 20. This is important because people confuse it with other pathologies. However, experts don’t consider people to be suffering from this condition if the symptoms appear during childhood or after the age of 45.

This disease affects emotions, behavior, and the ability to think. The symptoms vary, but hallucinations are frequent — both auditory and visual.

A person with schizophrenia perceives things such as voices or people that nobody else can hear or see. This symptom usually alters thinking and people may speak in a muddled way that doesn’t make any sense.

Another common sign is abnormal movement. For example, a person may move their arm excessively or adopt a strange posture for a while. Even, as we’ll explain later, this movement disorder can be characteristic of some types of schizophrenia.

What are the types of schizophrenia?

As per an article written at Universidad de Salamanca, both the types of schizophrenia and the acceptance of the disorder itself is relatively recent. In ancient times, people who suffered from this disease were thought to be possessed by demons.

For this reason, one can say that psychology has significantly advanced. Before the publication of DSM-V (Diagnostic and Statistical Manual of Mental Disorders, Fifth Edition), there were only five types of schizophrenia distinguished. We’re listing them below.

Read about the Differences Between Psychosis and Schizophrenia

The predominant symptoms in this kind of schizophrenia are usually delusions and auditory hallucinations. According to a study published in the Electronic Medical Journal, it’s the most frequent type.

There’s an alteration in these people’s emotional capabilities. They find it hard to act appropriately in all situations. That is, they tend to be uninhibited and have strange behavior. For example, laughing when someone gives them bad news.

This is one of the easiest to recognize of all types of schizophrenia. These people can stand for a long time without moving and without showing any expression on their faces.

They remain immobile but their mind is racing. So much so that they disconnect from the outside and don’t respond to stimuli.

Undifferentiated schizophrenia is one in which no specific symptoms predominate. It’s mainly a mixture of the other ones. Residual schizophrenia maintains certain symptoms, despite undergoing treatment.

The types of schizophrenia according to DSM-5

Today, DSM-5 is the standard manual for diagnosing mental disorders. This tool included numerous changes compared to previous editions in regard to the types of schizophrenia.

According to a study by Revista Iberoamericana de Psicosomática, the elimination of these subtypes is the main change. They now seek to determine the symptom that predominates at the beginning of the disease though.

Thus, instead of listing types of schizophrenia, they clarify course specifiers. They do it this way so the psychologist or psychiatrist can more easily evaluate and treat a patient with this condition.

You may be interested in Childhood Schizophrenia: Everything You Need to Know

The types of schizophrenia are still used as a classification

So, in summary, there are five types of schizophrenia: paranoid, disorganized, catatonic, undifferentiated, and residual. Despite the fact that many experts have removed this classification, many others continue to use it because it can be useful when establishing treatment.

What you must keep in mind is that any type is serious, poses a risk to the life of those who suffer it, and to their environment. Therefore, seek professional help if you think you or someone near you might be afflicted by it.

Learn All about Schizophreniform Disorder
Schizophreniform disorder is a type of schizophrenia with similar symptoms. Between 60 to 80% of these patients progress to schizophrenia. Read on! Read more »
Link copied!
Interesting Articles
Illnesses
Do You Know about the Genetic Basis of Cancer?