Helicobacter pylori bacteria are found in over 90% of cases of peptic ulcers. It can be transmitted through contaminated food and water. Find out what you need to know here! 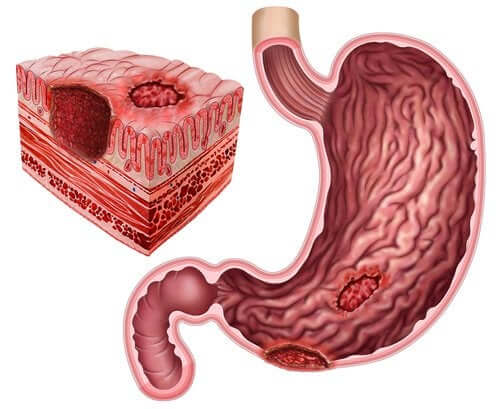 Peptic ulcers are a type of lesion that affects the gastroduodenal mucosa. Although the incidence of these ulcers is decreasing, it still affects a large part of the population.

More than 90% of peptic ulcer cases involve the presence of Heliobacter pylori. This is a type of bacteria that causes infections in the stomach.

Approximately two-thirds of the world’s population has this bacteria, which can spread through contaminated food and water.

An imbalance between aggressive and defensive agents of the gastroduodenal mucosa causes most ulcers. This imbalance is secondary to Helicobacter pylori infection or the consumption of non-steroidal anti-inflammatory drugs (NSAIDs).

In cases of peptic ulcers that involve Helicobacter, the eradication of the bacteria will diminish the relapses. However, only 10 to 20% of people infected with Helicobacter pylori will ever develop a peptic ulcer.

When there’s chronic consumption of NSAIDs, 50% of these people will have superficial gastric lesions. Also, the ulcers in these cases are usually asymptomatic.

The risk factors of peptic ulcers in people who consume NSAIDs are:

There are no studies that demonstrate that smoking, stress, or diet are factors that trigger peptic ulcers. However, smoking appears to negatively influence peptic ulcer healing.

Most people affected that have ulcers present symptomatology of dyspepsia. Therefore, when patients present dyspepsia symptoms, doctors will suspect an ulcer. Symptoms include epigastric pain on an empty stomach that subsides with food or antacids.

Information on lifestyle, drug treatments, and personal history of ulcer or Helicobacter pylori infection is important for diagnosis.

In some people, ulcer and gastroesophageal reflux disease can coexist, which can make diagnosis difficult. However, the most sensitive and specific test to confirm the existence of an ulcer is upper endoscopy (gastroscopy).

You may also be interested in: 10 Symptoms of a Peptic Ulcer

The goal of treatment is the relief of symptoms, healing of the ulcer, and the prevention of complications. Also, it’s a good idea to follow some hygienic-dietary measures, such as the following:

Proton pump inhibitors (PPIs) are currently the drugs that achieve the highest mucosal healing rates. However, you should only take them if your doctor advises it.

They should be taken before meals. Also, some studies show greater effectiveness when taking them in the morning rather than late in the day. Proton pump inhibitor drugs need 3 to 5 days to achieve maximum effect. However, there’s variability in the clinical response of liver metabolism to the drug.

The duration of peptic ulcer treatment depends on the location of the peptic ulcer. In duodenal ulcers, it lasts 4 weeks, while in gastric ulcers it takes between 6 and 8 weeks.

Eradication of the bacteria results in healing of the ulcer. Also, long-term ulcer complications are reduced.

The first choice of eradication treatment consists of administering a PPI and antibiotics (specifically clarithromycin, amoxicillin, and metronidazole) for at least ten days.

In penicillin-allergic patients, PPIs, clarithromycin, and metronidazole are used as the first choice for at least 10 days.

Recommendations for the use of NSAIDs for peptic ulcers

6 Foods You Should Eat if You Have Stomach Ulcers
These alkalizing and anti-inflammatory foods can help improve your health in the case of stomach ulcers. Their consumption is an excellent complement. Read more »
Link copied!
Interesting Articles
Illnesses
Causes, Symptoms, and Treatment for Gelastic Epilepsy