The neck is a very anatomically advanced structure as it contains numerous structures in very small space. 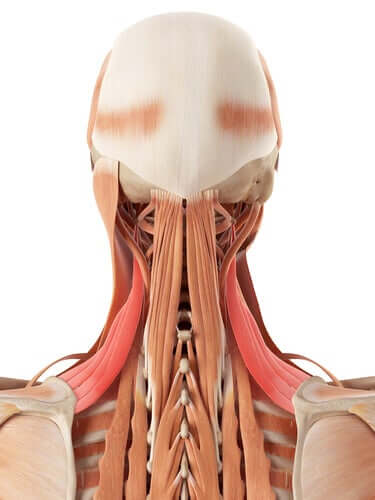 By studying neck anatomy, we can understand a bit more about our bodies. The neck is the part of the body that acts as a bridge between the trunk and the head. It’s a vitally important structure through where essential blood vessels and nerves pass.

It’s a thin and flexible area that lets us move our heads. However, it’s also a vulnerable zone, as any injury to it can damage the blood supply of the brain or its nerve transmissions.

The neck is a more complex structure than would appear at first glance. It’s made up of a series of bones, cartilage, muscles, vessels, and nerves. So, in this article, we’ll focus on the bones and cartilage that form it!

Neck anatomy: How can we define it?

To make studying the neck a bit easier, specialists have established a series of superficial limits to define it. The neck begins at the lower edge of the jaw and the occipital bone, which is the base of the skull. Then it extends to the clavicles and the sternum in front. In the back, the neck reaches the C7 vertebra.

The human neck is one of the most complex structures we have because it contains many important elements that converge in a very small space. Among these structures we can find:

Given these points, let’s talk a bit about the outer frame that protects all these parts.

You may like this article: 5 Relaxing Treatments for Torticollis, or a Stiff Neck

Neck anatomy: What bones do we have in our neck?

When talking about neck anatomy, we can’t ignore the bones! The skeleton of the neck is composed of cervical vertebrae, the hyoid bone, the clavicles, and the sternum. Seven vertebrae make up the cervical part of the spine, that is, the neck.

In addition, there are also intervertebral joints, which are what give it flexibility and movement. In fact, this structure is sensitive to shocks and is occasionally in pain.

The vertebrae aren’t all the same. As we’ve mentioned, the neck has seven vertebrae. From the third to the sixth, they’re all the same:

The first vertebra is called the atlas. It’s a kidney-shaped bone, without body or apophysis. This vertebra is formed by two lateral masses connected by arcs, hence its ring form. It’s the vertebra that contacts the occipital bone.

The second vertebra, or C2, is the axis. What differentiates it from the rest of the cervical vertebrae is its process. It’s called the odontoid process, which is a projection of your body in the form of a pin.

Finally, the C7 vertebra is also different from the rest in its process. It’s a spinous process, like those of the C3 to C6 vertebrae, but it’s not bifid. This spinous process is longer than the other cervicals and, because of this distinctive range, it’s also referred to as “prominent”.

You may like: 6 Tips for A Smooth, Young-looking Neck

This is a mobile bone located in the front of the neck. It’s located at the level of the third vertebra, between the jaw and the thyroid cartilage. Additionally, it doesn’t articulate with any other bone. It’s held by a series of ligaments that go to the temporal bones of the skull, called the Styloid ligaments. Furthermore, it’s anchored to the thyroid cartilage.

Cartilages and ligaments of the neck

Firstly, we must mention the thyroid cartilage, the cricoid and the epiglottis. They form the front part of the neck, they’re also part of the larynx, and allow us to breathe.

On the other hand, the discs placed between the vertebrae form the cervical joints, joined by a series of ligaments. The intervertebral discs have a central part called the nucleus pulposus and an external part called the annulus fibrosis.

The intertransverse and interspinous ligaments connect the vertebrae between their apophyses. Finally, we can also find the supraspinatus ligament, which, at its highest point, forms the nuchal ligament.

So, after learning about neck anatomy, we can all agree it’s a very complex part of our body. In order to fully understand how our necks work, we need to study it in depth. Its seven vertebrae, with their corresponding ligaments and intervertebral discs, are what allow the neck to be flexible and facilitate the movement of the head.

6 Simple Exercises for Alleviating Neck Pain
If you experience frequent neck pain, you're probably well aware of the discomfort that it can cause. Don't worry and keep reading for simple exercises for alleviating neck pain in a matter of minutes. You'll feel much better afterwards. Read more »
Link copied!
Interesting Articles
Anatomy and physiology
How Extreme Temperatures Affect the Human Body