Even though nose bleeding isn't a symptom of a serious condition, there are some natural remedies that can help stop it. Let's find out what they are so you can try them. 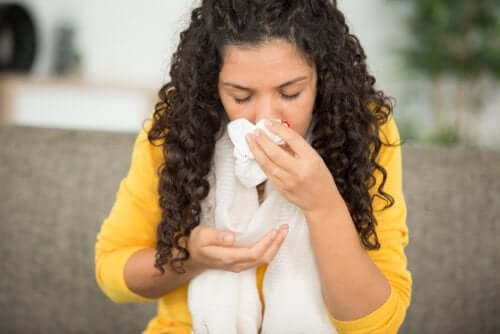 Nosebleeds, also known as nasal hemorrhages, and medically as epistaxis, is a common condition that can appear at the worst times, according to studies carried out by the Ochsner Clinic Foundation. The bleeding might a source of much alarm but it’s rarely a symptom of anything serious.

Instead, it’s usually the result of an injury, nasal allergies or other problems that affect the blood vessels lining the nose. While it’s neither painful nor there are other discomforts, there are a few natural remedies to stop them.

What are some of the common causes of nosebleeds?

Nasal hemorrhages can appear when the mucous membrane of the nose dries and hardens, and it leads to cracking. This same condition is really common in those taking blood thinners and the elderly, whose blood takes longer to clot. It’s also a common side effect among those patients who consume anticoagulant medications.

Other common causes of nosebleeds are:

One of the first things you should do while dealing with a nosebleed is to sit upright and lean forward. An upright position reduces vascular pressure while bending forward keeps the blood from flowing down your throat.

If the blood doesn’t stop, then you must see a doctor as soon as possible. Keeping the above in mind, you must also resort to some natural remedies. Here are some:

Indeed nosebleeds are due to many reasons. Despite this, there are some preventive measures that can help minimize the risk of their reoccurrence. If you have them often, then consider the following:

When to seek medical attention

Nosebleeds are rarely a sign of something wrong. However, it’s important to consult your doctor to dismiss any major health problems, like leukemia or a blood disorder if they occur frequently and without explanation.

You must seek immediate medical attention if the bleeding lasts for 20 or more minutes; if there’s a lot of blood loss, or if you received a blow or an injury.

Natural Remedies for Bleeding Gums
Use these natural remedies for bleeding gums in conjunction with better oral hygiene in order to make sure they stay as healthy as possible. Read more »
Link copied!
Interesting Articles
Natural remedies
Can I Calm Neuropathic Pain With Essential Oils?