In general, myotonic dystrophy is associated with Steinert disease. It may have genetic origins. In addition, it could also be a symptom of other diseases. 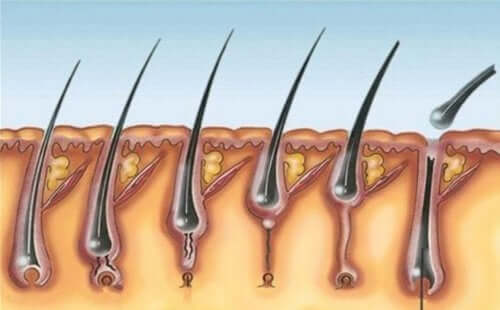 Multiple pilomatrixoma syndrome is a fairly rare syndrome. Typically, a pilomatrixoma is a benign tumor that appears in the cells of the hair matrix.

There are no conclusive data about the incidence of multiple pilomatrixoma. There are already large gaps in the data about it in its typical form because people often confuse it with other skin conditions.

Despite this, what we do know is that it represents between 2% and 3.5% of the total cases of pilomatrixoma. This condition usually takes place when there’s a family history of this type of disorder.

Discover: How to Cleanse Your Lymphatic System – Five Plant-Based Solutions

Let’s begin by defining pilomatrixoma itself.

Pilomatrixoma is a benign tumor that sprouts from the hair follicle matrix.

Nobody knows the cause yet, and it mainly occurs during childhood. Estimations reveal that this condition is responsible for about 10% of the skin tumors that appear in children.

These types of tumors are in the deep dermis and often spread to the fat layer. It’s a multiple pilomatrixoma when there are several of them. Note that these cases are usually inherited or concomitant diseases.

So far, only 40 recorded cases of multiple pilomatrixoma were hereditary. In comparison, 30 cases had to do with Steinert disease or myotonic dystrophy. In fact, for some authors, this condition is only a symptom of such myotonic dystrophy.

A pilomatrixoma is a hard nodule generally of the same color as the skin. It may appear at any age, but 60% of cases occur within the first decade of a person’s life. They’re also slightly more frequent in the sixth and seventh decades of life and slightly more prevalent in the female gender.

These nodules appear in the head and neck in more than half of the cases. However, but they can appear in any part of the body that has a hair follicle. They’re bluish-reddish. When you touch them, you can feel the hard interior and smooth surface.

Multiple pilomatrixoma syndrome may appear before or after myotonic dystrophy or Steinert disease. This is a type of muscular dystrophy transmitted genetically. Its main characteristic is the progressive deterioration of voluntary muscles. On the same note, it usually manifests faster and more severely in each next generation.

There are several lesions in multiple pilomatrixoma that sometimes converge with each other and form a kind of plaque. The growth of the nodules is slow and asymptomatic. Generally, the person who has them notices them on their skin.

Some people think that a complex of proteins called catenins has to do with multiple pilomatrixoma. This is because these are responsible for joining the actin of the cytoskeleton with the cadherins. Everything indicates that the root cause of this problem is the mutation of beta-catenin, which has been present in 75% of the pilomatrixoma cases.

Myotonia, which is the difficulty in relaxing the muscles, is useful for diagnosing this disease. Weakness and muscular atrophy are often also present, as are the opacities in the lens and moderate mental retardation. There may also be early frontal alopecia, testicular atrophy, heart block, and electromyogram alterations.

A diagnosis here is fundamentally clinical. There have been complementary studies to confirm this diagnosis, such as the use of an ultrasound. So, by questioning, doing a blood count, and urine and stool tests a doctor can confirm or rule out the presence of associated syndromes.

Sometimes, the appearance of the nodules is thin, atrophic and wrinkled or pseudo-blistered. This occurs only in 2% of cases, often in young women with limb injuries.

Only in exceptional cases do these tumors look crusty, similar to an ulcer. However, there are only 11 cases of this type in the records. Researchers think they’re perforating tumors.

We hope you’ve enjoyed this article. You can read more about this condition here.

What Are Boils? Seven Tips to Get Rid of Them
Boils are the result of skin wounds that have been exposed to bacteria that are on the skin surrounding the wound. Here are some tips to get rid of boils. Read more »