Mouth Ulcers or Sores: Everything You Need to Know

Mouth sores occur in people under 60 years of age and aren't usually a cause for concern. However, they shouldn't be ignored if they cause very intense symptoms, have strange characteristics or are very recurrent. 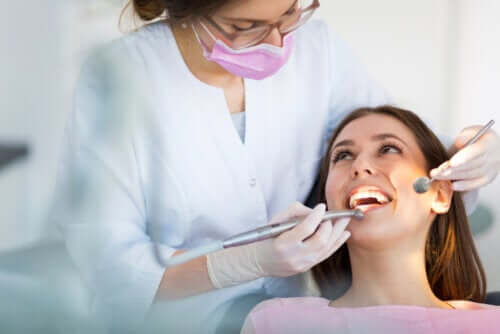 Mouth ulcers, or sores, are lesions that appear on the lips or at the base of the gums. They may also appear on the inside of the cheeks, the roof of the mouth, and around the tonsils.

These lesions are often painful, so activities such as brushing your teeth, eating, drinking or talking may cause some discomfort. The appearance of mouth ulcers is usually that of a whitish oval with a red area around it.

Specialists believe that they affect about 25% of the population. They’re more frequent in women, adolescents and those who have a family history of this condition. They aren’t contagious and are seldom a health risk for the person who has them.

Mouth ulcers can be classified in different ways. If they only appear very occasionally, they’re acute. However, when they’re recurrent, they’re considered chronic. According to their clinical manifestations, they can be of three types: major, minor or herpetiform. Let’s see more about each one:

Major ulcers or canker sores are more than 10 millimeters in diameter and can appear alone or in groups. These ulcers penetrate deeper into the tissue and usually remain there for more than a week, some even last months. They may leave a scar when they disappear and are usually located on the lips, palate, tongue, pharynx and inner cheeks.

Minor canker sores have a diameter of less than 10 millimeters and are the most common form. They’re shallow and located on the edges of the tongue or the internal mucosa of the lips or cheeks. They cause intense pain that radiates to adjacent areas, but most often disappear on their own in less than a week. They appear several times in spaced intervals.

These types of mouth ulcers form sores similar to those caused by herpes. Herpetiformis aren’t contagious, although they do tend to reappear. They occur in groups of several small ones that are never larger than 3 millimeters. Sometimes they end up joining together to form larger lesions.

Keep reading: Herpes Keratitis, What Is It?

Why do mouth ulcers or mouth sores appear?

There are many reasons why mouth ulcers appear. In most cases they’re caused by the following triggers:

Sometimes mouth ulcers are caused by a deficiency of vitamin B12, zinc, folic acid or iron. They can also be an allergic response to bacteria in the mouth.

There are more severe cases in which these lesions are a manifestation of severe health problems, such as inflammatory bowel disease, diabetes mellitus, HIV/AIDS, Crohn’s disease, celiac disease, autoimmune diseases, or oral cancer.

You may also be interested in: Learn All about World AIDS Day

Most mouth ulcers or mouth sores are harmless and don’t require treatment. They usually go into remission within 7-14 days. In principle, it’s appropriate to establish whether products, food or medicines have caused them. If this is the case, the best thing to do is to replace these elements with other products that won’t cause any issues.

If they’re the result of an injury or the cause is unknown, the treatment for canker sores consists of adopting some changes in your routine and using natural remedies to alleviate the symptoms:

In case the symptoms are very severe, the home remedies don’t work or the problem becomes recurrent, we highly suggest visiting your physician. You may need more than just home remedies and a change in your routine.

The main potential complication is that the problem may reappear too often, or if superinfection of the ulcers occurs. To prevent this from happening, your doctor may prescribe topical oral antiseptics containing chlorhexidine hydrochloride, hexetidine, povidone-iodine, benzalkonium chloride, or sodium borate.

Your doctor should indicate how they should be administered. In some cases, doctors may even prescribe antibiotics, especially if the ulcers are large or recurrent.

The best way to prevent cold sores is to maintain proper hygiene habits. You have to brush your teeth at least three times a day, use dental floss, and a non-irritating rinse. You should also visit your dentist at least once a year.

A healthy, balanced diet helps prevent this condition. If it’s recurrent, the most advisable thing is to avoid foods that can irritate the mouth, such as acids, spices, or very spicy foods. It’s important to be aware of any possible allergies as well.

Regular physical activity and practicing relaxation techniques are effective measures to control stress. Although mouth ulcers shouldn’t usually be a cause for concern, in some cases they do require medical attention. These are some cases to keep an eye out for:

We also recommend visiting a specialist when the pain is very intense or these sores generate additional symptoms, like a fever. Sometimes, these small measures are crucial to avoid major problems in the future.