After losing her vision, Mrs. Kuroki secluded herself in her home and didn't want to leave. Her husband filled their garden with flowers so that she could enjoy their fragrance and cheer up. 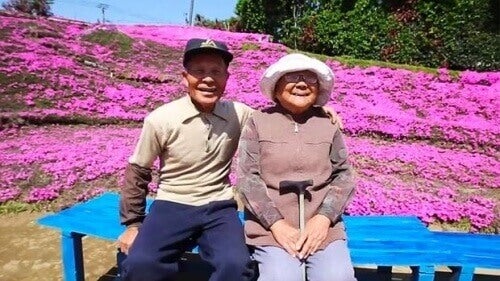 The things that we do for love are amazing and sometimes truly incredible. What surprises us most is that there are still couples, that despite the years, keep doing things to show each other love and infuse the relationship with happiness. One of the best examples of this belongs to a Japanese farmer, who’s known around the world for a noble and beautiful act of love: he spent nearly two years working and cultivating flowers for blind wife.

The story originated from a YouTube video that was shared by people around the world, reaching millions of views and comments in just a short time.

In Shintomi, in the Miyazaki prefecture of Japan, Mr. and Mrs. Kuroki live surrounded by an immense flower garden that has recently turned into a tourist attraction.

Despite being a privately owned garden, the Kurokis receive around 7,000 visitors each year who come to admire the beautiful scenery, but also for the special story behind the garden and these two old farmers.

It all started in 1956 when the newly married couple first moved into the house that would be their home for the rest of their lives. They had two children and lived happily for years.

However, as the years passed, Mrs. Kuroki’s health began to decline. Due to her diabetes, she developed serious vision problems that eventually left her completely blind.

The impact of the disease was really difficult for the entire family, especially for Mrs. Kuroki. Depressed, she secluded herself in her home for a long time, refusing to leave unless absolutely necessary.

Visit this article: The Healing Power of Hugs

It was then that he got the idea to give her one of the gifts that any man in love has given at one point: flowers. But he knew that a bouquet wouldn’t be enough, so he got to work on his big surprise.

Taking advantage of the hills around their home, Mr. Kuroki set himself to the task of planting “Shibazakura” seeds, a type of flower known for its strong fragrance.

He planted a field full of flowers for blind wife to see if aroma would entice her to come outside. When he realized that his idea was going to work, he toiled at his task for two years to completely cover his garden with the flower.

Despite the fact that Mrs. Kukori had lost her vision over 30 years ago, this didn’t stop her from enjoying her husband’s beautiful work.

Now instead of staying shut inside her home, she goes out every day with her beloved husband to enjoy the fragrance of the flowers and the fresh air of a new day.

After his story was shared on YouTube, Mr. Kuroki has been interviewed by international media highlighting his accomplishments and above all this grand act of love for the world to see.
How to Find Lasting Love in a Relationship
Lasting love starts with one's own self since self-esteem is the base of being able to establish solid and mature relationships that can last a lifetime Read more »
Link copied!
Interesting Articles
Sex
9 Factors that Can Decrease Sexual Desire