Loneliness and Insomnia: An Unexpected Connection

Although it might not seem so, loneliness and insomnia often go hand-in-hand due to the sense of helplessness and insecurity that comes with loneliness. Find out more in the article below. 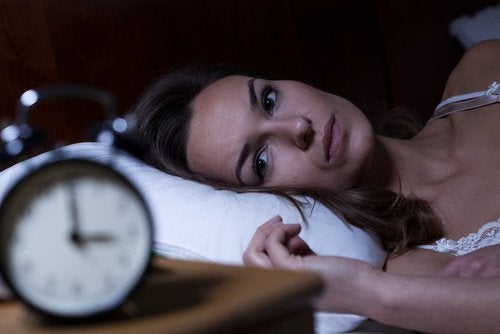 Loneliness and insomnia are more closely connected than you may think. Isolated individuals may be more prone to insomnia. This also applies to those with limited social lives. Also, social networks and the internet have created the perfect conditions for people to have fewer close contact with those around them.

In addition, when people move away or treat you unkindly, it can cause you to become entrenched in your own controlled but lonely space. This predisposition to isolation can have many downsides; and, one of the worst can be having a hard time falling asleep.

Lonely people are 25% more likely to not sleep well

When a group of researchers from King’s College (UK) did a study on sleep habits, they expected to find a link between insomnia and several different lifestyle factors. However, this isn’t what happened. Their research studied factors like employment status, having or not having children, alcohol consumption, and even genes.

In the end, none of these had a direct relationship with sleep. However, one aspect did: a feeling of loneliness. Indeed, people who felt alone were 25% more likely to suffer from this unpleasant sleep disorder.

The trend was even greater among those who reported having suffered from abuse during childhood. Abuse, rape, and bullying all trigger isolation, which in turn affected the sleep of the people involved.

All of this invites us to reflect on how trauma impacts a person’s sleep quality and quantity. After all, abuse scenarios involve stress, confusion, anxiety, and psychological changes. However, this wasn’t the only conclusive study on the subject.

The same trend occurs in adults

In 2011, researchers in South Dakota conducted a similar study. At that time, they focused on 95 adults who said they felt “alone,” although they weren’t 100% isolated. Their study couldn’t find a direct link between loneliness and insomnia.

However, most people described a phenomenon known as fragmented sleep. In this, their rest was interrupted a lot. Both studies came to similar conclusions: perceptions of loneliness generate insomnia, which is bad for human health.

Overall, researchers from the first study think that this link with insomnia is an evolutionary response. From this perspective, loneliness in the human psyche translates into insecurity and a sense of helplessness. We are social beings that need to connect with others to survive, which is why feeling lonely hurts us so much.

Also, when we feel isolated, the brain prepares itself for prevention, struggle, and escape. This could explain why people wake up constantly during the night. Our body is trying to get out of this situation, and in order to do it, it needs you to be awake and alert.

In brief, there may be a self-preservation response that goes off when you feel lonely. This is particularly true for those who are newly independent (young people) or those who have recently moved to a new place.

Learn how to be independent

The results of both studies confirm it’s key to learn how to be independent. Preparing from a young age can make it easier to adapt to changes during adulthood, and parents have a crucial role to play in all this.

How can you help young people become more independent? Each parent will likely have their own method. But, what’s important is that children and young adults are placed in controlled situations where they need to take care of themselves.

A sense of accomplishment could be another key to establishing stability for newly independent children. What is more, regular phone calls and emails can give a sense of support. Taking a step-by-step approach can make things much easier for the young one trying to adapt to a new lifestyle.

It’s also a good idea for parents to visit on weekends. This way, they can contribute to their children’s emotional stability. This helps renew their confidence while reminding them that they’re not alone.

How to fight loneliness and insomnia

Strangely enough, even though we are more connected than before, we are more lonely than ever. Smartphones, social networks and being online 24/7 has pushed us away from those closest to us. Because of this, we need to renew the tools that bring people together socially, for our own physical and emotional well-being.

What is more, we need to pay attention to people who have been victims of abuse, those who have recently moved or lost a partner, and the elderly. They are the most vulnerable to feelings of isolation.

Therefore, if you know someone who might be feeling lonely, don’t be scared to reach out to them. More often than not, it will make a huge difference. On the other hand, if you’re the one feeling lonely, try reaching out to your close friends or family. They can help you feel better and finally get a good night’s rest.

7 Good Habits for Fighting Insomnia and Resting Better
Fighting insomnia doesn't always require pills. Sometimes we can rest better by adopting better habits. In any case, we also need to eliminate harmful ones. Learn our 7 tips for fighting insomnia naturally in our post today.  Read more »
Link copied!
Interesting Articles
Did you know?
New Year's Traditions Around the World