The Ancient Legend of the Red Thread

"You will never be able to escape your heart, so you better listen to what it has to say…" – Paulo Coelho, "The Alchemist" 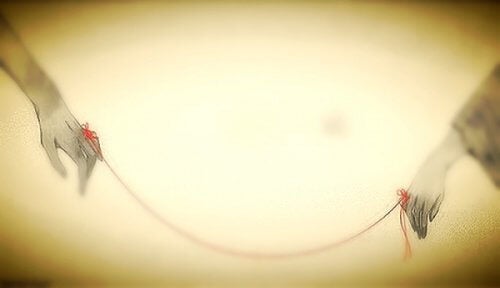 When the red thread appears, it marks a turning point in your life, a point that will forever alter your way of looking at love. There’s an ancient myth that says it doesn’t matter what kind of relationship two people are in at the time, or whether they’re worlds apart.

If they’re meant to be, they will always be connected by a “red thread”—although it might not happen until the end of the road.

What is the red thread?

This red thread, known as destiny, is impossible to break, no matter what happens.

It doesn’t matter how long it takes you to meet this person, or how long you spend apart. Even if you live on other sides of the world, the thread will stretch far enough that your hearts stay connected.

The thread is with you from birth, and it spins throughout your life. Some people say that the moon emerges every evening to meet newborns and unite these new souls with a red thread tied around her finger.

It will determine your future, and guide your soul through life so that you’ll never be lost, even at the edges of the earth.

See also: How to end a relationship in a healthy way

As the legend tells us:

Long, long ago, an emperor learned that there was a powerful witch who lived in one of the provinces of his kingdom. She had the ability to view the red thread of fate, so he sent for her presence.

When the witch arrived, the emperor ordered her to look at the other end of his red thread, and tell him who would one day become his wife. The witch agreed and began to follow his thread.

The search led to a market, where a poor peasant woman with a baby in her arms was selling her wares. The witch stopped in front of this peasant and asked her to stand up.

She then beckoned to the young emperor and said, “Here ends your thread.” When he heard this, the emperor was furious and, thinking that the witch was playing a trick on him, he pushed the peasant woman aside with the child in her arms. The fall caused a wound on the child’s forehead that would stay with it forever.

He ordered his guards to detain the witch and had her beheaded.

Many years later, it was time for the emperor to marry, and his court suggested that he wed the daughter of a powerful general in the kingdom. He agreed and eventually the wedding day arrived.

On that day, he saw his future wife’s face for the first time. When she arrived to the court she wore a white gown and a veil that covered her face completely. When he lifted it, he saw that her beautiful face was marred by an unusual scar on her forehead.

The background of the legend

This legend is so well-known among European cultures that it’s perfectly normal to see millions of people wearing a piece of red string around their wrists, even today.

As for the exact origin of the story, it’s unclear whether it originated in China or Japan. The legend began with the discovery that the ulnar artery connects your ring finger to your heart, the source of your life and the metaphorical corner of the soul that harbors your ability to love. (Other sources refer to the middle finger, but this is mostly in the Western tradition.)

The red thread can connect the love between a mother and father, a brother and sister, friends, or partners. The goal is always the same: to know and to love one another.

Read more: 8 Things You and Your Partner Should Know About Love

The great loves of your life

“They say that throughout your life you have two great loves: one is the person who you marry or live with forever, and might become the mother or father of your children…It’s the person you’ll spend the rest of your life with.

But they also say there’s a second great love, the person you will always lose. Someone who you were born connected to, so bound together that the chemical forces defy reason. But destiny will also prevent you from reaching a happy ending.

One day you’ll stop trying…You’ll give up your search and seek out the other person. But don’t forget: you’ll never go another night without longing for their touch, a kiss, the chance to talk with them one more time.

You know who I’m talking about because as you read those words, their name came into your head. You might have left them behind, tried to end your suffering and find peace (which will come), but there won’t be a single day that you don’t wish they would appear once more to visit you.

How does the red thread influence your life?

Every now and then, these two types of love match within the same person. But they generally come separately, constantly causing some form of grief. Both kinds of love are essential to life itself, and you should be thankful for the ability to feel so deeply.

You can’t impose your will on the red thread. Even your own ignorance can’t sever it. It may be invisible to you, but it still directs many of your steps in life.

The appearance of the “red thread of love” symbolizes the before and after of your life, and it’s something that you’ll find will forever alter your existence and your conception of love itself.

Sometimes coincidences are so strong that they can’t simply happen by chance. Everyone single person on this planet has a heart interwoven in some way with another person in eternal love.

They call them soulmates, spirits with the same destination…

6 Keys to Finding Your Soulmate
We can't find an emotional partner that meets our lifestyle, values and principles if we haven't first defined what we want, who we are and what identifies us. Finding your soulmate can be much easier than you might have thought... Read more »
Link copied!
Interesting Articles
Health and sexuality
5 Types of Sexual Orientation