Having a godmother is a wedding tradition that's common in several faiths like the Spanish Catholic tradition. However, having one is not necessary according to the Canon law of the Church. Therefore, it’s usually a way to make the mother of the groom feel special. 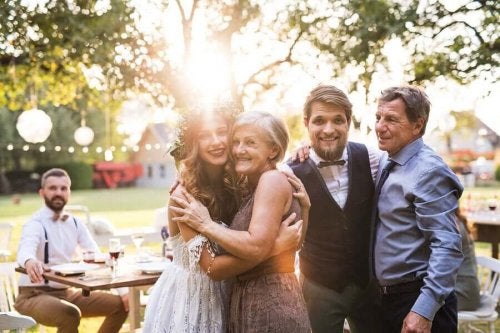 Traditionally, a godmother is the mother of the groom who helps with certain aspects of the wedding ceremony. Overall, the godmother’s duties depend on the type of wedding.

Godparents and the Church

When it comes to traditional weddings, we all may picture a woman, typically the mother of the groom, walking her son down the aisle. She then remains by his side throughout the ceremony, accepting guests, helping things run smoothly, etc. This is the godmother.

However, godfathers aren’t thought about at a wedding. Instead, the godfather spiritually “assists” in the initiation of faith as an obligatory figure during Baptism and the Holy Communion. Nevertheless, Canon Law doesn’t regard them as necessary for the sacrament of marriage. Therefore, their role is more symbolic and an accepted tradition and not necessary for the ceremony.

In any case, the requirements for being godparents, according to Canon Law, are:

Is the witness the same as the godmother?

No. It’s not the same. The witness is not a religious figure, but the person who, by law, needs to confirm the marriage. Therefore, it’s normal in most weddings for the godparents to also be witnesses if they want. However, the witnesses can be someone else.

Since the witnesses don’t have to be religious, they’re there for legal purposes. Therefore, the Church doesn’t need them to be Christian or baptized. According to the law, they only need to have enough legal capacity (be of legal age) to witness the marriage and sign the certificate.

We recommend: How to keep a marriage happy

As we have seen, it’s traditional to have a godmother in many Catholic weddings. In this sense, they have some important duties, despite not being official.

Helping the groom choose his suit for the day of the wedding is one of the most important duties. Most of the time, she will also pay for it. In any case, she has to help the groom make the right decision.

But that’s not all. The godmother is a key role in a wedding. Therefore, her outfit must also meet specific standards. She must look elegant and be well dressed…and never wear black or white.

Accompany the groom at the altar

Of course, this is the most emotional moment. The godmother has to walk the groom down the aisle, taking him by his arm, reassuring him and making him excited about the new life that’s about to begin with his wife.

Join the godfather when leaving the church

The groom arrives with the godmother and the bride with the godfather before officially being announced as husband and wife. Then, after the ceremony, the newlyweds leave the church together.

Because of this, a new tradition began where the godfather and godmother leave the church together, just behind the bride and groom. The godfather is typically seen to the right of the godmother, and both are also congratulated by the guests as they leave.

Recommended for you: 10 tips to save money on your wedding

Traditionally, the godmother is a key figure at a wedding –  though not as important as the bride and groom, of course! Therefore, she usually sits next to the bride and groom at the reception to make sure all the guests are well and having a good time.

Another tradition is that the godmother should also help in the choice and preparation of all the details of the wedding (from the floral decoration to the reception).

Do you want to get married in a church? Do you know who your godmother will be?

Tasks the Bride and Groom Have to Do to Organize Their Wedding
When the bride and groom organize their wedding, they may have doubts regarding the tasks they need to do. In this article, we clear them up! Read more »
Link copied!
Interesting Articles
Home tips
How to Identify the Signs of Woodworm

It's important to learn to recognize the signs of woodworm because this pest can do considerable damage. Unfortunately, it isn't…

Home décor
5 Original Ideas to Refresh Walls in Your Home

To refresh walls in your home, you don't need to change the structure, nor do you need to spend lots…

Lifestyle
4 Signs You're Addicted to Shopping

Knowing if you're addicted to shopping is a difficult process if you don't know enough about the disorder. In general,…

Would you like your children to be interested in museums? So, don't miss this article. Here are some handy tips…

Home tips
Six Ideas for Making Your Own Napkin Rings

Napkin rings have a double function at the table. On the one hand, they allow you to keep your napkins…