Learn All About Asthenozoospermia 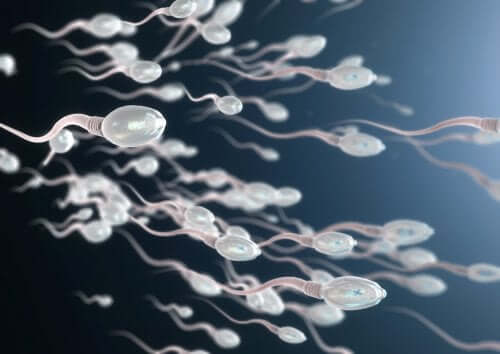 Asthenozoospermia is defined as reduced sperm motility. It’s also known as asthenospermia, or more commonly known as lazy or slow sperm. It’s relevant because it’s a cause of infertility. In this article, learn all about asthenozoospermia and how medical professionals detect it. Keep reading!

Etymologically, the word asthenozoospermia means “lack of strength in sperm”. It’s a Greek word. The prefix “a” means absence and the suffix, “steno”, force.

According to the World Health Organization (WHO), this condition occurs when there’s less than 40% of motile sperm in an ejaculate. It’s a cause of infertility. As the sperm don’t move, they’re unable to reach the oocyte and fertilize it, and, as a result, pregnancy can’t occur.

The causes of asthenozoospermia

The exact causes of this condition are unknown. However, different factors can affect sperm motility:

Similarly, age and diet are very important factors. Sperm motility has been shown to decrease after age 50. Also, it’s essential for men to follow a healthy diet. The absence of vitamins and antioxidants may be related to asthenozoospermia.

Body temperature is a determining factor. The testicles should be two degrees colder than the rest of the body. Sperm motility can reduce if the temperature is disturbed. Wearing very tight clothing and using saunas can cause this.

You may like this article: How to Interpret the Results of a Spermogram

How medical professionals detect it

A seminogram is the test that analyzes sperm. It’s also known as a spermiogram or semen analysis. It allows medical professionals to study the movement of sperm. At least two seminograms are required to diagnose asthenozoospermia. A seminogram evaluates two types of motility:

However, doctors also have to conduct a physical examination. In addition, they should request hormone tests. Knowing FSH, LH, and testosterone levels can guide the diagnosis.

How to become a father if you suffer from asthenozoospermia

Asthenozoospermia is usually a cause of infertility. However, some treatments can help you become a father despite this condition. The goal is to get a sperm sample with sufficient motility to fertilize an egg through assisted reproductive technology.

There are different treatments for asthenozoospermia, depending on the degree. The most prominent is ICSI (intracytoplasmic sperm microinjection). It consists of introducing a sperm into each oocyte. Thus, it increases the likelihood of fertilization.

Secondly, other methods focus on improving motility itself. They’re mainly focused on diet. They involve taking supplements rich in amino acids, such as L-carnitine and antioxidants.

Ideally, the cause of your asthenozoospermia should be detected and corrected. But this isn’t always possible. Other techniques, such as in vitro fertilization or artificial insemination, may prove helpful.

This article may interest you: What Is In Vitro Fertilization?

Conclusion on all about asthenozoospermia

Asthenozoospermia is a problem that causes reduced fertility in men. Therefore, you need to know the factors that can cause it in order to reduce or avoid them. Likewise, you need to be aware of its importance to reduce the impact it can have on you and your self-esteem.

How a Man’s Diet Impacts His Quality of Sperm
Fertility is directly related to diet and lifestyle. The consumption of toxins, alcohol, and an inadequate diet can influence the quality of a man's sperm. Read more »
Link copied!
Interesting Articles
Medication
Reasons Why Some Medications Cause Headaches

Interesting Articles
Diet
Low-Carb Diet For Weight Loss: What You Need to Know