Juvenile diabetes is an increasingly common disease in children under five. Learn more about this condition and how it's treated in this article. 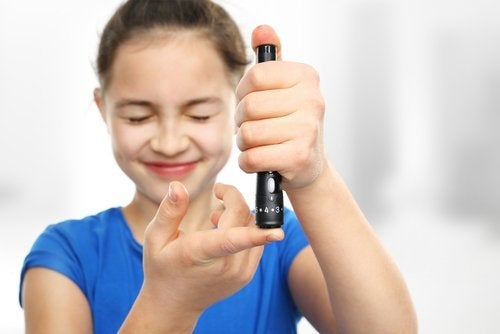 There are two different types of juvenile diabetes, but the most frequent one is type 1 diabetes. This type of diabetes is insulin-dependent, which means it requires an external insulin supply. Overall, it’s the most common since type 1 diabetes represents over 90% of the cases of diabetes diagnosed in children under fourteen.

Diabetes is a disorder of the endocrine system characterized by the low production of insulin in the pancreas, which leads to the accumulation of high levels of sugar (glucose) in the blood. It’s usually of an autoimmune origin since the body itself destroys those cells of the pancreas that are no longer functional. On other occasions, insulin production may be normal, but cells cannot properly use it due to a defect. This is mainly the case in type 2 diabetes.

The diagnosis of juvenile diabetes consists of measuring fasting blood glucose levels (glycemia), which shouldn’t exceed 126 mg/dl. This is according to the criteria of the International Association of Pediatric and Adolescent Diabetes ADA-ISPAD 2014.

Blood glucose is high when fasting, so doctors will also do other tests to confirm juvenile diabetes. They must find out what type it is and rule out other diseases that also present themselves with hyperglycemia. This is because the treatment of these diseases is different and the prognosis will be worse if not diagnosed in time.

After a diagnosis, the patient must begin treatment immediately to control their blood glucose levels. Also, this helps prevent the appearance of ketoacidosis. This is because this could complicate the prognosis.

Frequency and age of onset

Juvenile diabetes mellitus type 1 is increasingly common and typically manifests between the ages of 1 day old to 14 years of age. Doctors diagnose about 10 to 25 cases for every 100,000 children in this age range. However, there’s a significant increase in children under 5 years.

You may be interested in: Seven Clues for Detecting Diabetes Early

Therefore, the typical scenario of a child with juvenile diabetes who arrives at the emergency department usually presents these symptoms:

Even though the most frequent cause of hyperglycemia is diabetes mellitus, it’s important to also consider the possibility of other diseases such as:

You may be interested: Effects that dehydration causes on your body

The symptoms of presenting ketoacidosis:

The symptoms of severe ketoacidosis:

Overall, the treatment of this disease aims to control metabolic levels and avoid complications that are both acute and chronic. Typically, these are the symptoms that may affect the development of children with juvenile diabetes. In the treatment of juvenile diabetes, the education and training of the child and the family are very important. This allows them to control the disease and avoid complications.

Thus, there are three fundamental pillars in the treatment of diabetes:

Fortunately, the treatment of childhood diabetes has evolved a lot in recent years. The pharmaceutical industry offers all sorts of types of insulin. Overall, there are some with fast and some with slow actions. They allow better control of the disease.

Advances and expectations of available treatments

Fortunately, there’s also a great effort going on for the proper training and education of children regarding diabetes. However, some of the challenges are:

Also, the advances we expect soon will ease the lives of diabetic children. Overall, systems and procedures will likely fewer punctures and less frequency in the supply of insulin. Plus, we can also expect advances in new gene therapies and the synthesis of insulin compounds to improve the lives of patients. There are a lot of children with diabetes. However, there’s a bright future when it comes to controlling it.

How to Raise a Children with Type 1 Diabetes
Type 1 diabetes, which occurs most frequently among children and adolescents, is present in about 1.25 million Americans. Learn some tips for raising a child who has Type 1 diabetes in this article. Read more »
Link copied!
Interesting Articles
Illnesses
Can Celiac Disease Cause Infertility?