How to Calculate Glycemic Index

The glycemic index is useful for diabetics but also for people who suffer from hypoglycemia. What does it consist of? How is it calculated? In this article, we'll talk all about it. 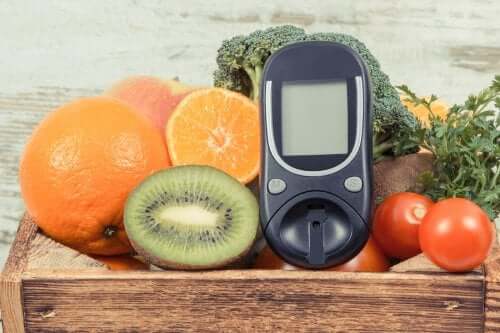 The glycemic index is a parameter that has gained importance in recent years, especially for diabetics. This parameter measures a food’s ability to raise blood sugar levels. Blood sugar is the amount of glucose in the blood, which occurs after the digestion of carbohydrates in foods.

The glycemic index was created about 30 years ago to classify foods according to the speed with which they raise blood glucose levels. However, its usefulness isn’t limited to diabetics. In this article, we’ll explain everything you need to know about it.

The glycemic index is a parameter that measures a food’s ability to raise blood sugar levels.

To properly understand the glycemic index, it’s important to first talk a bit about diabetes. Diabetes is a disease that affects blood glucose levels. This occurs because the body doesn’t produce insulin or can’t use it properly. Insulin allows the entry of glucose into the cells.

When this occurs, the excess blood glucose can cause extensive damage as time goes on. Many studies link diabetes with heart, eye, and kidney diseases, among others.

The glycemic index arose due to this problem, as it allows people to measure blood sugar levels after eating different foods. Thus, it became possible for people to choose the most appropriate foods according to their state of health.

For example, a diabetic needs foods with a lower glycemic index. However, when a person suffers from hypoglycemia (a possibly life-threatening condition characterized by low blood sugar), they need others with a higher index.

You may also like this article: 7 Ways to Control High Blood Sugar Levels

How to calculate the glycemic index

In short, we can say that this index is a numerical expression that states how blood glucose varies after eating a certain food. Actually, it’s a simple laboratory test. Nowadays, numerous calculators allow you to know the glycemic index of foods.

It’s used to determine the rate at which carbohydrates pass into the blood as glucose. It’s measured on a scale from 0 to 110. Thus:

Therefore, the higher the value, the faster blood glucose levels will rise. Diabetics should try to avoid this glucose spike. Therefore, it’s useful for them to plan meals while keeping this index in mind.

The glycemic index of foods varies depending on factors such as preparation or form of consumption. For example, juice has a higher glycemic index than fruit in its natural state.

As we mentioned above, this parameter can help people plan their meals. However, there are many other influencing factors, such as glycemic load. Therefore, it’s important to consult a specialist before starting a diet.

Also, the glycemic index of the same food varies according to certain aspects. For example, in the case of fruits or vegetables, this parameter increases the riper the food is. Similarly, the preparation and form of consumption also influence the index. Interestingly, even the way of baking bread can influence this index.

How food is cooked can determine its index rating. The time during which pasta is cooked determines a greater or lesser index. Pasta al dente has a lower index than pasta that has cooked for longer.

This article may interest you: What to Eat When You Have Diabetes

The glycemic index is a useful parameter in certain situations, such as for diabetics, which allows them to relatively control their blood sugar spikes after foods.

Overall, some of the most recommended foods include legumes, vegetables, and most fruits. Fiber tends to reduce a food’s glycemic index.

On the other hand, it can help people know how to help someone who’s suffering from hypoglycemia. In this case, choosing food with a high index will help people who suffer from this condition.

However, it’s best to consult a doctor or nutritionist to learn about the issue before making a decision that will affect your diet.

Diabetes Control Devices to Monitor Glucose
Continuous glucose monitoring and exercise is essential when you have diabetes. In today's article we'd like to tell you about some diabetes control devices. Read more »
Link copied!
Interesting Articles
Illnesses
Diabetes in Children and Adolescents