Sometimes it can be especially difficult to ignore the hurt that someone close to us has caused. For our own sake, we need to learn to let it go. 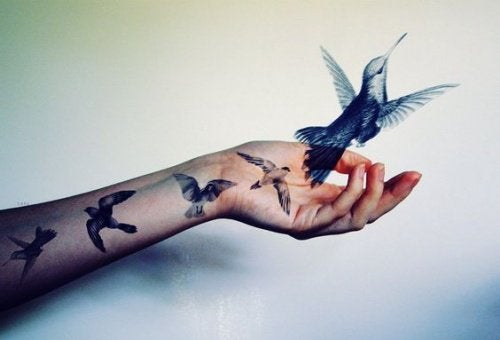 Winston Churchill said that no one can reach their destiny if they spend their days throwing stones at every dog that barks at them. Sometimes, by ignoring things you can’t change is an intelligent way to move on and put aside the things that just aren’t worthwhile.

Now… how do we know what’s “worthwhile” and what’s not? This is something that each of us should appreciate because every situation in life is unique and personal.

For some, it will be criticism and negative people. Others may struggle with letting go of personal fears and limiting beliefs.

Today, we’d like to invite you to reflect on this important topic concerning personal growth: knowing when to confront and letting go of the things that keep us from moving on.

The art of ignoring intelligently

Ignoring intelligently is an art, a subtle act of wisdom and maturity. We should never ignore what’s truly important:

It’s Never Too Late to Realize that You Deserve Better

Let’s take a look at a few strategies that will help us put into practice some of the components that define the art of ignoring.

Our greatest fault is “postponing” happiness

In an intriguing article published in Psychology Today, it was found that people miss out on opportunities simply because they think that it’s not the right moment.

Check out this article:

Bad vs. Good People: Those Who Bring Happiness

What makes us fall into the belief that “now is not the right time”?

Happiness should never be postponed. If your heart and mind are telling you that something is wrong, it’s time to start ignoring everything else that tells you otherwise. Doing things requires courage.

At first glance, it might seem easy enough to ignore criticism and hurtful remarks. In reality, it actually takes a lot of effort because it has a direct effect on our self-esteem.

In these types of situations, ignoring the negative behavior of others is the most intelligent course of action.

Sometimes your worst enemy exists only in your minds:

There are certain limiting attitudes and beliefs that we carry within us from our childhood or that are inherited from other people which can lead us to believe thoughts like “I don’t know how” or “I can’t”.

These are just several small examples, that when they accumulate, can become a central theme in your life,  making yourself subject to what others will say over your own desires. And that isn’t right!

Learning to ignore the things that don’t really matter is also the art of personal courage. It’s the conviction that in order to be happy, you will need to take the plunge and just say “NO.”

I’m Distancing Myself Because I Love Myself
There's no reason that loving someone else needs to get in the way of loving yourself. It's really important to tell youself "I love myself." Read more »

Interesting Articles
Wellness
The Dangers of Creams: The Expert Opinion