Do you have anemia and don't know how to deal with it? Some infusions for anemia and a number of recommendations may allow you to stabilize your iron levels. 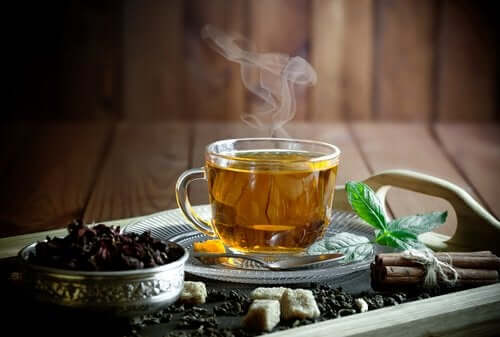 Anemia is a problem that affects many people. Although this condition may manifest for different reasons, the most common is related to iron malabsorption. However, did you know that there are infusions for anemia?

Infusions have various benefits. They help relieve stomachaches or improve digestion. Also, they can help your body absorb iron better. Throughout this article, you’ll discover some of the best infusions for this condition.

According to one important study,  some infusions work better than others because they contain less tannic acid (which prevents proper iron absorption). Experts recommend drinking these infusions at least one hour after meals so that your body can absorb the iron from foods. Drinking one a day is enough.

One of the first infusions for anemia is fennel infusion. Its scientific name is Foeniculum vulgare and, although we’ll talk about consuming it as an infusion, you can also include fennel in your meals.

To make this infusion:

Also, you can add fennel bulbs to many of your dishes to enjoy delicious iron-rich meals.

Mint is a widely used plant that most people have in their kitchen. This plant is perfect for accelerating digestion and reducing the heavy feeling caused by eating large meals. However, it also helps if you suffer from anemia.

One of the properties of mint is that it’s a rich source of iron. For this reason, it’s good to consume it at least one hour after eating. You can drink a mint infusion at least twice a day. In this regard, it’s best to buy mint leaves to prepare a homemade infusion.

You should also read: 5 Homemade Mint Remedies that You’re Going to Love

Another of the infusions for anemia is a cinnamon (Cinnamomum verum) infusion. You can also consume this spice that people use to prepare different foods and desserts as an infusion if you follow these steps:

Rosemary (Rosmarinus officinalis) is also very rich in iron. Also, it has different properties that make it an excellent ally to fight gas and stomach discomfort.

A rosemary infusion doesn’t only help expel gas, but it’s a rich source of iron.

Although you can prepare it as a normal infusion, it’s preferable to buy rosemary leaves instead of pre-prepared tea bags. The first option is much more natural and effective.

In addition to all the infusions for anemia we just talked about, you should include foods rich in iron in your diet. According to experts, some foods rich in this mineral are:

Plus, including a glass of white wine in your meals can also help boost the absorption of iron present in both grains and plant-based foods. However, experts advise against exceeding the recommended amount of one glass.

Now that you know about the infusions for anemia, it’s essential to remember that you should never drink them right after meals. This way, you make sure they don’t hinder the absorption of iron from foods.

It’s also vital to introduce foods rich in iron in your diet, such as those we mentioned above, and follow your doctor’s recommendations. You may need to take some additional supplements to help stabilize your iron levels.

Have you ever used one of these four infusions for anemia? Did they help you?

No-fail Homemade Remedies for Anemia
Certain smoothies can provide your body with the vitamins and minerals it needs if you have anemia. Read on to find out how to make three tasty remedies for anemia. Read more »
Link copied!
Interesting Articles
Medicinal plants
Oregano Essential Oil for Cold Relief