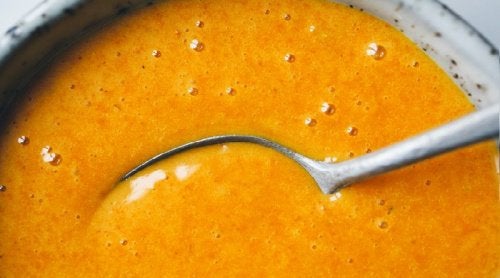 Turmeric is a fundamental ingredient in Indian culture as well as in other Asian countries. It also plays an important role in natural, alternative medicine, along with its role in the kitchen. Turmeric juice is said to contain more than 300 kinds of antioxidants, along with many other nutrients.

Turmeric juice for a healthy life

An effective medicinal beverage can be obtained from turmeric roots. These roots have a bitter and slightly spicy taste, similar to raw ginger. Although dried turmeric can be used, it’s best to get juice from the roots of a fresh plant.

Before making the juice, you have to thoroughly wash the pieces of root, then peel them.

Turmeric juice also has properties that can help to prevent the spreading of cancerous cells. It eliminates free radicals, which minimizes damage to cellular membranes.

In this way it can help to prevent some types of cancer, such as prostate, breast, lung, liver, skin and even colon cancer.

Turmeric juice can also help to slow the advance of Alzheimer’s disease. As we all know, this terrible disease causes a gradual loss of memory.

Its anti-inflammatory properties allow it to block COX-2 enzymes, which are responsible for neural inflammation. It also aids better oxygen flow to the brain, which can help people with Alzheimer’s.

Turmeric juice regulates blood sugar level, which makes it a good remedy for those who suffer from diabetes.

How do I take it?

Turmeric can be consumed as a powder or as a juice. We can add it to soup, tea, smoothies, milk, bread rice, stews and desserts.

We recommend reading: Detox Your Body with This Ginger, Turmeric, and Cayenne Pepper Beverage

How to prepare turmeric juice

The following is one of many recipes for turmeric juice that is healthy as well as delicious.

Drinking a little turmeric juice on an empty stomach in the morning is good for everyone. However, its particular properties may upset some stomachs. Drink in moderation, as an excessive consumption of turmeric juice can cause stomach ulcers.

5 Impressive Anti-inflammatory Remedies with Turmeric
Continue reading to learn about 5 anti-inflammatory remedies with turmeric. They each combine it with special medicinal ingredients that will enhance its effect, including coconut, cinnamon, olive oil, and black pepper. They even taste good! Read more »
Link copied!
Interesting Articles
Medicinal plants
Elderberry Syrup: Benefits, Precautions, and Preparation

Facial treatments
How to Treat a Sunburned Face with Natural Remedies

Having a sunburned face is a very common problem as soon as the weather starts getting sunnier. This condition usually…

Low back injuries can cause intense pain in the back and waist, though it can also be felt in the…

Pregnancy
How to Treat Cystitis During Pregnancy with Home Remedies