When there's excessive sweating that isn't associated with a situation that causes it, it's called hyperhidrosis. In this article, we're going to tell you how it happens possible treatments. 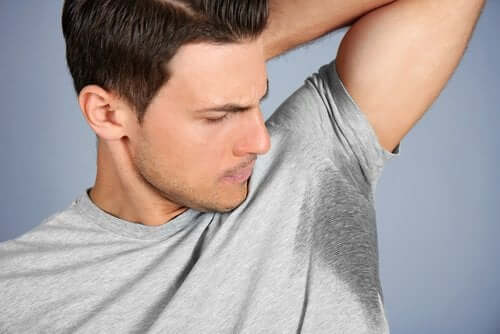 Hyperhidrosis sweating is when the human body sweats abnormally. It’s excessive sweating that doesn’t have a triggering cause.

Sweat is basically water. Only 1% of its components are salts. The sweat glands produce it in the body to regulate body temperature. It’s the nervous system that orders, in normal situations, to sweat more or less.

Even if it’s the whole skin that sweats, the disorder is more evident in the hands, feet and armpits. If the moisture is stored in these regions for a long time, they can become infected generating odor by the decomposition of sweat through bacteria. This situation is called bromhidrosis.

Specialists estimate that 2 % of the world’s population fulfill the criteria of hyperhidrosis. In addition, it’s common for the disorder to run in families as parents and children, or siblings tend to have the same condition.

Basically, we can attribute hyperhidrosis to two general causes: primary or idiopathic, and secondary. The most common form of presentation is primary hyperhidrosis, in other words hyperhidrosis that’s self-generated.

On the one hand, the primary type is called essential focal hyperhidrosis. The problem lies in the nerves that innervate the sweat glands. In these people, these nerves are overactive, stimulating the production of sweat all the time. Although this type of sweating doesn’t have anything to do with heat or exercise, it can increase with stress.

On the other hand, secondary causes of hyperhidrosis are varied. These are diseases that have among their symptoms increased sweating. Among them we have:

Any sweating that’s perceived as excessive can’t automatically be diagnosed as hyperhidrosis. The medical community has established criteria that, if fulfilled, allow the pathology to be diagnosed.

The first unavoidable condition is that the patient must have suffered more than six months of excessive sweating without a direct explanation. That’s to say, sweating generated without suffering from heat episodes or after intense exercise.

In addition to this characteristic, doctors look for at least two of the following circumstances:

Keep discovering: All About Anhidrosis: The Inability to Sweat Normally

Five Natural Tricks to Eliminate Sweat Stains
The bleaching properties of some natural ingredients can help to eliminate sweat stains on your clothes without damaging the garments. Read more »
Link copied!
Interesting Articles
Illnesses
What Are Autoinflammatory Diseases?