All About Anhidrosis: The Inability to Sweat Normally

Anhidrosis can be caused by burns, genetic pathologies, or nerve injuries, among others. In this article, learn all about anhidrosis. 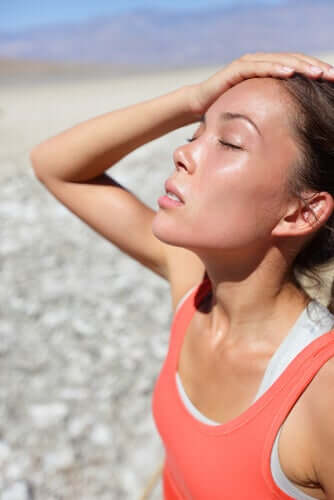 Anhidrosis is a condition characterized by an abnormal lack of sweat in response to heat. The sweat glands don’t produce sweat or don’t produce enough of it. It’s also known as hypohidrosis, adiaphoresis, or oligohidrosis, among others.

Anhidrosis can affect the entire body or only some parts. It’s a rare illness that can be difficult to diagnose at times.

However, it’s important to be aware of its possible symptoms, as it can be fatal. If the body doesn’t sweat, it can’t lower its temperature and could become excessively hot. In this article, we’ll tell you all about anhidrosis, as well as its causes.

All about anhidrosis: why does it occur?

Anhidrosis has numerous causes. This condition is most commonly due to skin trauma, such as burns, infections, or other injuries. It can also be caused by medication such as morphine or botox.

Other factors that can lead to this condition are:

We should also note that anhidrosis can occur due to dehydration. Similarly, it can be caused by Sjögren syndrome, characterized by dry eyes and mucous membranes.

This article may interest you: 5 Things Your Sweat Says about Your Health

All about anhidrosis: the symptoms it causes

The main symptom of anhidrosis is the absence of sweat or not producing enough sweat. In addition, other symptoms such as dizziness and a warm feeling can occur, since sweat is the body’s way of regulating temperature.

Similarly, muscle cramps, weakness, and redness can occur in some areas, mostly on the face and neck.

There are two types of anhidrosis, depending on the body parts it affects:

Heat stroke occurs when the body’s temperature exceeds 104°F. It’s an urgent situation. If it isn’t treated, it can damage different organs or even cause death.

At first, it causes confusion, delirium, nausea, and vomiting. Breathing and heart rate speed up. It’s necessary to act as soon as possible to lower body temperature and avoid body malfunction.

It’s worth mentioning that children are very vulnerable to heat stroke. This is because their internal temperature rises faster than that of adults. Also, their bodies release heat less effectively. Therefore, you must pay attention to these cases.

You may like this article: Discover Six Effects of Heat on the Body

How to diagnose anhidrosis

As we’ve mentioned above, this is usually a difficult condition to diagnose. Because of this, a doctor must take a good medical history and know all the symptoms.

In addition, additional tests such as a thermoregulatory sweat test (TST) can be requested. This consists of covering the patient with a powder that changes color in contact with sweat. The patient is placed in a camera that increases their body temperature and digital photographs observe whether they sweat or not.

Doctors can also request a skin biopsy, which is a more invasive technique. They usually request it in patients with partial anhidrosis.

All about anhidrosis: treatment

Treatment will depend on the cause of the condition. When it’s due to a drug, the patient needs to stop taking it. When the cause of anhidrosis is a blockage, the use of exfoliants sometimes helps unblock the sweat ducts.

Although this condition can’t be prevented, certain measures can help prevent heat stroke, for example. Firstly, it’s essential to wear light clothing and avoid sun exposure and vigorous physical activity on hot days. You can also use a spray bottle with water to cool off.

When the anhidrosis is partial, it usually doesn’t cause a problem nor require treatment. Nevertheless, it’s advisable to consult with a specialist so that they can assess the case.

Many different causes can lead to anhidrosis, which often goes unnoticed. If you notice any of the symptoms we mentioned here, don’t hesitate to see your doctor. They’ll request the pertinent tests and will propose the treatment or necessary measures to fight it.

7 Great Natural Remedies for Sweaty Palms
Do your hands sweat? Today, we're going to show you some simple natural remedies for sweaty palms, to help you deal with this uncomfortable problem. Read more »
Link copied!
Interesting Articles
Illnesses
The Symptoms and Treatment of Granuloma Annulare

Interesting Articles
Illnesses
The Symptoms and Treatment of Granuloma Annulare