How to Remove a Fishbone Stuck in Your Throat

Having a fishbone stuck in your throat is a rather annoying problem that can lead to complications. Are you ready to find out how to get it out? Then keep reading! 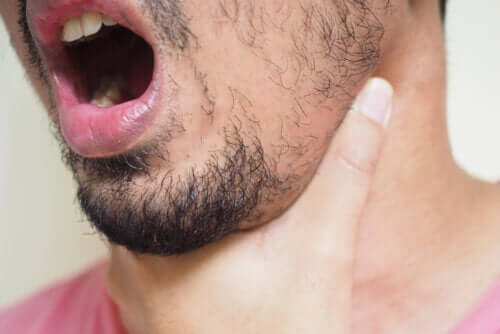 The consumption of fish can be risky, as there’s always the possibility of getting a fishbone stuck in the throat.

Fishbones have a characteristic pointed shape that can cause injury. This is why cooks usually try to remove all the bones when they add fish to a dish. Still, some of these bones are so small they can be easily overlooked.

Having a fishbone stuck in the digestive tract is a common accident, especially among children and adults with psychiatric illnesses. In addition, studies reveal these bones can shift to other tissues and get stuck in some organs, such as the thyroid gland.

Learn all about what to do if you get a fishbone stuck in your throat in this article.

What does a fishbone stuck in the throat feel like?

A person with any foreign body stuck in the throat will experience symptoms immediately so patients usually report discomfort from the very first moment it occurs.

In fact, the intensity of the signs increases when the object involved is of considerable size.

Some of the main symptoms reported are:

Possible consequences of a fishbone stuck in the throat

It’s possible for the bone to just go down the esophagus without getting stuck at any time. However, it could still cause injuries along the way, due to its sharp edges. One of the most frequent complications is a cut or abrasion in the throat or esophagus.

People with this type of injury may report the presence of a foreign object in the throat and pain when swallowing. In the most severe cases, bleeding and respiratory distress occur, this is a medical emergency.

Other frequent complications in people with foreign objects stuck in the throat are:

Read about The Symptoms of Different Types of Fish Poisoning

Three ways to remove a fishbone stuck in the throat

Fishbones are usually small and the body can push them down without them causing any damage. The gastric juices break them down to properly digest them and then the body expels them through a bowel movement. The real problem arises when the bones are larger.

In general terms, always consult a doctor after ingesting a foreign body. In the meantime, there are certain techniques you can use to remove a fishbone stuck in the throat when there’s no professional intervention nearby.

This is one of the body’s natural defense mechanisms and useful to expel foreign objects from the respiratory tract and esophagus.

There’s a sudden increase in pressure when a person coughs to expel any object stuck in this area.

The first instinct is to cough whenever a person swallows a fishbone or any other object. In these cases, you must try to do so with greater force than usual, to dislodge the object.

However, consult a doctor should immediately if blood there’s blood or chest pain during the process.

Read about Choking in Children: What to Do and How to Prevent It

Fishbones are often stuck in the tonsils and the base of the tongue, according to multiple studies. These areas are easily accessible and food exerts certain pressure when passing through them.

In this respect, professionals recommend drinking a glass of water or 2 tablespoons of olive oil to dislodge the bone. The water will exert a slight continuous downward pressure and push it into the stomach.

Similarly, oil is a lubricating substance and will make the foreign body slide along the surface, facilitating its expulsion through coughing.

Foods with a viscous consistency can be the best allies when you have a fishbone stuck in your throat. They form a homogeneous mass when swallowed, which can envelop the fishbone and take it down into the stomach.

Some of the foods with this quality are:

When should you see a doctor?

As we mentioned above, you must go to the doctor if you think you may have swallowed a fishbone. This is because it’s the only way to determine if there’s any esophageal injury. The bone sometimes goes down without any problems but might cut something in its trajectory. In turn, it could become infected and produce an abscess.

In addition, people should also see a doctor immediately if the bone remains stuck after several minutes. This can lead to serious complications, although these are rarely fatal.

In addition, be alert to the presence of the following symptoms:

This will be the only option available when the fishbone doesn’t come out on its own. A specialist can remove the foreign body using tweezers if it’s in an accessible area of the throat. To perform this procedure, the fishbone must be in plain sight when opening the mouth.

However, if it’s already descended into the esophagus the doctor will have to extract it via endoscopy. This is a procedure in which they introduce a small flexible tube into a body cavity to examine what’s happening there.

One of its major advantages is it’s a minimally invasive procedure and the recovery is immediate. In addition, it also allows treatment of any existing complications, such as a laceration, bleeding, or ulcer.

One of the best preventive measures is to thoroughly remove all fishbones before making a meal, especially if it’s salmon, shad, or trout. In addition, you must chew the fish slowly, several times, to detect a bone before swallowing the bolus.

This type of accident is frequent in people with a dental prosthesis because they can’t feel the bone when chewing. In addition, be particularly alert with children and older adults.

The first thing to do is to remain calm and follow some of the recommendations mentioned above if you have a fishbone stuck in your throat. It’s important to consult a specialist if the fishbone doesn’t come out or if any complication occurs as only they can solve the problem.