Choking in Children: What to Do and How to Prevent It

Choking in children is a common accident that can lead to death. Therefore, the best alternative is to prevent it, mainly by monitoring children while they eat and play, as well as leaving small solid objects out of the reach of children. 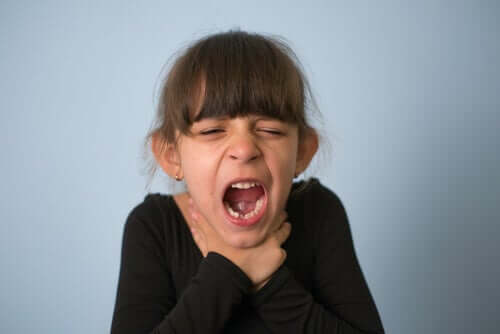 According to available data, it’s estimated that choking in children is one of the most common non-natural accidents. Also, it’s the third leading cause of death in both childhood and old age. Therefore, it’s necessary to focus both on prevention and how to address it.

Choking prevention in children is the best alternative. Since it can lead to death, it’s best to eliminate the risks of it happening – mainly from four months of age, when it becomes a latent danger.

If you aren’t able to avoid this accident, you should know what to do to make sure the consequences aren’t serious. Simple first aid measures can save your child’s life, which is why you should be familiar with them.

In a more precise manner, choking in children is the obstruction of the airways by a foreign body. In the worst cases, the airways become completely obstructed, which doesn’t allow the air to reach the lungs, thus causing death.

Most of these cases of obstruction occur in children under three years of age. The highest peak occurs in children between 6 and 12 months of age. In most cases, children choke on food, which very often corresponds to a nut or hard candy.

Other hazardous foods are meat and sausages, as well as bones and fish bones. Due to their texture and shape, sausages are also risky. In general, any solid object that fits into a child’s mouth is also dangerous.

Read on: How to Resuscitate a Baby

Choking in children has an unpredictable outcome. Thus, it’s best to prevent this accident. The first thing you should consider is that most of these cases occur when a child is eating or playing. Thus, it’s essential to supervise children during these activities.

Here are other preventive measures:

Find out more here: What to Do When Someone is Choking

What to do in the case of choking in children

The Heimlich maneuver is a suitable and urgent method for choking in children. If choking occurs in a child despite preventive measures, the first thing you should do is stay calm. This allows you to rapidly assess the situation to know what you need to do. When a child is choking, the first thing they do is cough, talk, or cry.

If the child coughs, it’s best to let them and encourage them to keep doing it. Sometimes, inappropriate intervention makes the foreign object move, meaning it’s harder to extract. You have to avoid hitting the child’s back, pressing their abdomen, or giving them something to drink. When coughing doesn’t extract the object they’re choking on, you should call the emergency services and do the following before they arrive:

If the child doesn’t eject the object they’re choking on, you should perform the Heimlich maneuver up to five times in a row. These are the steps you have to follow:

Drowning Symptoms after Swimming
Drowning symptoms after swimming or secondary drowning happens when someone is unable to breathe due to fluid having accumulated in the lungs. Read more »
he
Link copied!
Interesting Articles
Children
How to Explain Death to Children?

Interesting Articles
Illnesses
Causes of Fibromyalgia: Could it be Hereditary?

Diet
Is There a Relationship Between Diet and Acne?

Decades ago, specialists investigated the possible relationship between diet and acne. Acne is a condition that develops in the pilosebaceous…

Anticoagulant treatment, as its name suggests, is used to prevent the blood from carrying out the clotting process. Thus, it…