How to Recognize Depression in Teenagers

Do you suspect that your child may be depressed? In this article you'll discover the main symptoms of this mental health problem and learn how to recognize depression in teenagers. 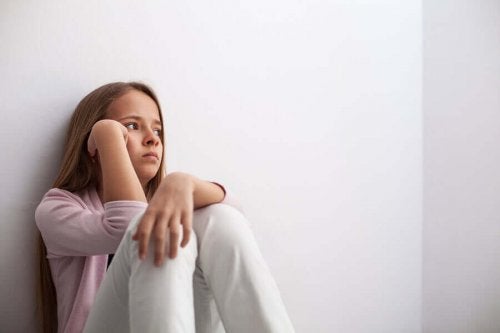 Adolescence is a stage of life in which brings plenty of changes; teens want to find themselves, and they may experience first loves and disappointments. Without a doubt, it’s a difficult stage for young people and also for their parents. Depression in teenagers is more common than you might imagine and isn’t the same as an occasional bad mood.

Taking this information into consideration, below are some warning signs that you should be able to recognize in order to detect depression in teenagers.

Depression in teenagers: what is it?

This condition involves a feeling of deep sadness over a prolonged period of time.

Depression is defined as “a syndrome characterized by deep sadness and inhibition of psychological functions, sometimes with neurovegetative disorders.”

This mental health problem causes the person to lose interest in doing activities that they previously enjoyed. Additionally, your teenager will be affected to such an extent that it will modify his or her way of thinking, feeling, and behaving.

When we talk about depression in adolescents, we’re talking about serious functional, physical, and emotional problems. In extreme cases, these problems can even lead to self-harm or suicide attempts.

Approximately 10-20% of adolescents worldwide experience mental health problems. However, many are neither diagnosed nor treated.

It’s true that there are many pressures that are normal during adolescence, such as the desire to belong to a group, the ups and downs of first love, and school expectations.

These ups and downs can cause sudden mood swings in young people. However, depression goes further than that. When it comes to depression, we’re talking about a severe feeling of melancholy or sadness that lasts over a long period of time.

Any teenager can suffer from depression. However, there are some situations or characteristics that could increase the risk of your child suffering from this disorder. Moreover, these risk factors can include genetic predisposition or brain biology and chemistry.

Therefore, take a look at the following list of risk factors that can generate stress in young people and trigger depression:

Symptoms of depression in teenagers

A specialist will decide the best treatment according to the severity of the condition.

Opening your eyes and being aware of any sustained change in your child’s personality, behavior, and attitude over time is the best way to support and help them. Below is a list of the most common symptoms of depression in teenagers, all of which you should pay careful attention to and look out for:

Note: It’s worth clarifying that a teenager doesn’t need to be suffering from all of these symptoms to be classified as depressed. If your child is suffering from any of these symptoms, you should visit the doctor with your teen. A specialist will be the best person to evaluate your child and give the most appropriate recommendations for treatment.

Treatment for depression in teenagers

If you suspect that your child is depressed, the first thing to do is to talk to your trusted doctor. A medical professional will know how to guide you and determine the best treatment for your child.

Generally speaking, if a teen is suffering from depression, a doctor will prescribe a combination of antidepressant medications and psychotherapy.

Psychotherapy involves attending meetings with a therapist (psychologist or psychiatrist) who will try to help the adolescent recognize his or her illness. Additionally, the professional will help the teen to change his or her negative thinking to start seeing the glass half full again.

Regarding medication, fluoxetine and escitalopram are the most common drugs for treating depression. Both medications have been approved by the FDA for the treatment of depression in teenagers.

At the slightest suspicion that your child has depression, go to the doctor with your teen. As a result, he or she will evaluate your teenager and make a diagnosis. Then, your teen will be able to start medical treatment and hopefully start to see life in a different way.