How to Fight Off a Cough with Pepper and Honey Tea

A combination of black pepper and honey may help reduce a cough. Both ingredients are expectorants and help soothe respiratory tract irritation. Find out how to prepare it. 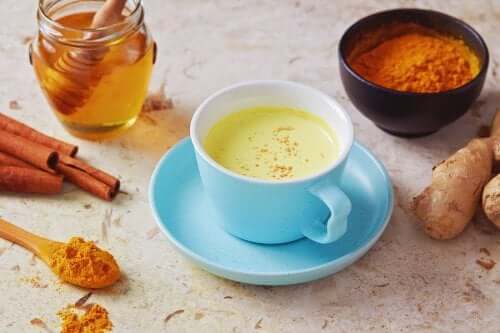 Coughing is an uncomfortable symptom that often appears with infections that affect the respiratory system. It’s the immune system’s reaction when being attacked by viruses and bacteria. Did you know that you could fight your cough with pepper and honey tea?

Natural medicine claims that both ingredients reduce the irritation of the bronchial tubes and encourage phlegm expulsion. But is it true? Keep reading to find out.

Fighting off a cold with pepper and honey tea

Fighting off a cough with a pepper and honey tea is said to have interesting benefits. These natural ingredients have been used since ancient times as allies to improve respiratory health. In fact, experts in Ayurvedic medicine often point to their use in flu, colds, bronchitis and other conditions.

Each ingredient can also be used individually to relieve discomfort such as a sore throat, phlegm or chest congestion, among others. However, the true secret is that when you combine them, their benefits are enhanced.

Find out: Use Onions to Fight Coughs Naturally

The benefits of black pepper

Although all varieties of pepper bring health benefits, in this particular case we suggest using black pepper. It comes from the native Indian plant Piper nigrum, and has been cataloged as “the queen of spices” due to its interesting properties.

An article published in the Journal of Critical Reviews in Food Science and Nutrition explains that the piperine compound in black pepper has anti-inflammatory and antioxidant effects. Thus, this substance helps stop the effects of free radicals on cells and, therefore, prevents chronic diseases from developing.

In addition, scientists believe that its regular intake contributes to the adequate absorption of other nutrients, which is key in strengthening the immune system’s operation. Therefore, it helps the body fight off irritants and pathogens that affect respiratory health.

The benefits of honey

This ingredient has been used since ancient times for its benefits with cough and phlegm.

Honey is one of the most widely-used foods in alternative medicine for the relief of dry and productive coughs. In fact, there’s scientific research that supports its benefits. In fact, a 2010 clinical trial found that honey works better than two drugs commonly used to treat coughs: dextromethorphan and diphenhydramine.

This organic ingredient has antibiotic properties that help treat bacterial infections, according to the findings of the study Honey: its medicinal property and antibacterial activity.

In addition, it is also antiviral and antiseptic, which is key to relieving the symptoms of lung conditions. This study also corroborates that it has anti-inflammatory effects.

For all of these reasons, honey may be one of the best supplements to relieve throat irritation, excess phlegm production, and other symptoms that accompany coughing. Best of all, it’s safe to ingest by both children and adult patients.

Also read: A Stimulating Medicinal Drink for a Cough and Colds

Fighting off a cold with pepper and honey tea

To fight off a cough with a pepper and honey tea, you simply have to add the two ingredients in water. You can also add lemon and ginger, two ingredients that provide additional cough relief benefits.

For example, the book Herbal Medicine explains that ginger has anti-inflammatory and antioxidant properties, while lemons have an antimicrobial effect.

Important! Before fighting off a cold with tea…

Although this cough remedy could be effective, it’s not recommended in some cases. Avoid drinking it if you have intestinal diseases such as Crohn’s disease and irritable colon.

You should also visit a medical expert if you are pregnant, breastfeeding or under any medical treatment. Do not take more than the indicated amount, as excess intake could be harmful.

And of course, last, but not least, if you have any doubts, visit a medical expert before drinking this tea. Remember that if the cough persists over time, you should go to the doctor’s office to confirm that it is not a symptom of a more serious health issue.

Three Honey Remedies to Relieve the Flu
Honey remedies are quite popular due to their expectorant, anti-inflammatory, and antiviral properties. This is because honey is one of the best natural anti-flu ingredients. Discover how to take advantage of it with these three remedies! Read more »
Link copied!
Interesting Articles
Naturopathy
What Is Colloidal Oatmeal and What Are Its Benefits?

Naturopathy
6 Side Effects of Excessive Use of Apple Cider Vinegar

Some people are completely unaware of the possible side effects of the excessive use of apple cider vinegar. Although people…