How to Fight Helicobacter Pylori Bacteria

Helicobacter Pylori is known to be the cause of most stomach ulcers, gastritis, and other stomach infections. • To fight this bacteria, it's best to increase your consumption of foods with high antibacterial powers. 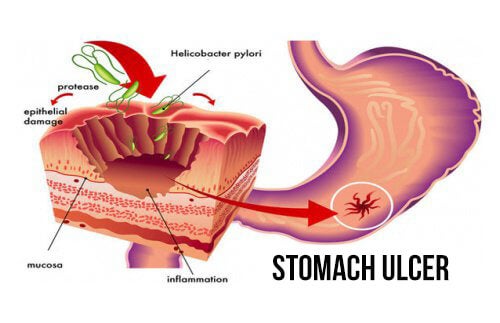 Helicobacter Pylori is known to be the cause of most stomach ulcers, gastritis, and other stomach infections. According to studies, they estimate that approximately two-thirds of the world’s population is infected with Helicobacter Pylori. This is because it is very easy to transmit, although sometimes it does not have any symptoms or problems. Fortunately, there are many ways to fight this bacteria and relieve the health problems it causes.

If you are suffering from a problem like stomach ulcers or gastritis because of Helicobacter Pylori Bacteria, we recommend the following natural remedies to fight it, eliminate it, and improve your health.

Verbena oil is a plant that belongs to the Gramineae family. It is characterized by its carminative and digestive properties, as well as it’s effect on curing flatulence. According to various studies, essential lemon verbena oil can help with getting rid of Helicobacter Pylori Bacteria.

Propolis is known to be a natural antibiotic and bactericide that has the ability to strengthen your defenses, fight infections, and treat problems like gastritis. This food, also known as bee resin, is a substance used to protect hives from infection. We assure you that propolis has the ability to eliminate Helicobacter Pylori Bacteria because of its amazing properties.

This root is known worldwide for its many medicinal properties, especially for its effects and benefits on the digestive system. We recommend eating ginger to fight stomach acid, nausea, dizziness, stomach problems, ulcers, etc. Besides having a bactericidal ability, it could eradicate Helicobacter Pylori Bacteria.

This food also has properties that help fight and get rid of Helicobacter Pylori. However, you have to eat it raw. Just like broccoli, it can cause flatulence, but you can try it in small amounts to see how you handle it. Try making a salad with finely diced cabbage leaves with a little bit of vinegar and lemon dressing. Another option is to make a fresh juice diluted in water.

This food can help fight Helicobacter Pylori Bacteria thanks to its high content in a phytonutrient called sulforaphane. According to various studies, it shows that frequent consumption of broccoli eliminates the bacteria.

The same component that eliminates Helicobacter Pylori is also related to the prevention of gastric cancer. Remember, that the consumption of broccoli can produce a lot of flatulence. However, you can prepare it cooked and mixed with cumin and ginger in order to reduce this annoying effect.

This Asian spice is full of medicinal properties that have been the focus of research in the last few years. It is used to treat dyspepsia, which is a disease that includes other digestive disorders like distension, stomach issues, nausea, or gas. Also, its properties help stimulate gastric juices which protect stomach mucus by prohibiting the actions of Helicobacter Pylori. However, experts recommend not overeating this.

Other Elements that Can Help with this Treatment

7+ Stomach Ulcer Symptoms To Be Aware Of
If you're suffering from stomach ulcer symptoms or are looking for ways to prevent them, try some of the food suggestions in this article. Read more »
Link copied!
Interesting Articles
Natural remedies
3 Home Remedies with Honey for Respiratory Health