Hormonal changes in menopause don't happen suddenly, but take place gradually. Menopause isn't a single moment, but a process. We'll explain what to expect at this stage when estrogen begins to decline. 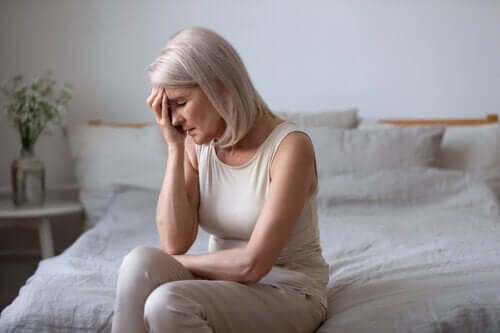 Going through the hormonal changes of menopause isn’t easy for most women. Like any stage of change, new issues and problems arise which are a challenge for the body and mind.

We must understand that talking about menopause isn’t the same as talking about climacteric. In menopause, we’re focusing on menstrual cycles. A woman is menopausal when twelve consecutive months have passed without menstruation.

Climacteric, on the other hand, is the cessation of the menstrual cycle plus all the other elements that accompany the process. Although menopause is gradual, we can speak of three stages within it:

Hormonal changes in menopause are driven by a decrease in the production of estrogen and progesterone. The lower amount of both these hormones in the body is to blame for the symptoms.

In normal menstrual cycles, ovulation occurs in the middle of the phase. This ovulation, or the release of an egg into the fallopian tubes to prepare for fertilization, is possible because the female body has estrogen and progesterone.

Both hormones are synthesized in the ovaries. When these organs suspend production, there’s no ovulation and, therefore, no menstruation. In short, this is the direct cause of the menopausal period.

As estrogens and progesterone fulfill various functions in the human body, and not only direct ovulation, menopause has many symptoms. Primarily, the substance that causes the most hormonal changes in menopause is estrogen.

You may want to read: Discover the Menopause Diet

We can attribute the hormonal changes in menopause, for the most part, to estrogens. These are sex hormones that form in the ovaries and adrenal glands. When a woman is pregnant, they’re also produced by the placenta.

Estrogens activate and deactivate genes in the cells to achieve their purpose. Thus, they can give the order to produce or not to produce certain proteins in the body, as the professor of Obstetrics and Gynecology Jorge Salvador points out. And they don’t only promote ovulation, but they also:

Based on all the estrogen functions we mentioned, we should imagine that the symptoms of hormonal changes in menopause derive from alterations in these functions. When estrogens decrease, the following happens:

To counteract the hormonal changes in menopause, doctors may prescribe hormone replacement therapy. Thus, it can be performed systemically or locally for specific symptoms.

This therapy consists of adding to the body the estrogen it lacks due to decreased production. This artificial and external estrogen would replace the deficiencies and control the symptoms.

The systemic form of hormone replacement therapy is estrogen pills or patches. In addition, some scientific studies such as the one published in 2015 in the Revista Centroamericana de Obstetricia y Ginecología associated some of these therapies with increased risk of other diseases, they should be used with caution.

Physicians evaluate whether the benefit of the therapy actually outweighs the possible risks. They must assess how much discomfort in quality of life a hot flash or vaginal dryness means. For osteoporosis, other treatments that support the bones without using hormones are available.

An interesting option is local estrogen, which doesn’t penetrate the entire body. There are vaginal preparations with very small doses of estrogen that improve, for example, vaginal dryness. There the risks mentioned above don’t apply.

It’s very important that you consult with a doctor you trust about your symptoms. The best first approach is to eliminate all the doubts and questions generated by hormonal changes in order to make a wise therapeutic decision. If we understand that menopause is an inevitable change, then we’ll face it in the most natural way possible.