Causes of Endometriosis During Menopause

It's very common for the symptoms of endometriosis to disappear during menopause. However, there are also many instances in which they not only remain but worsen. 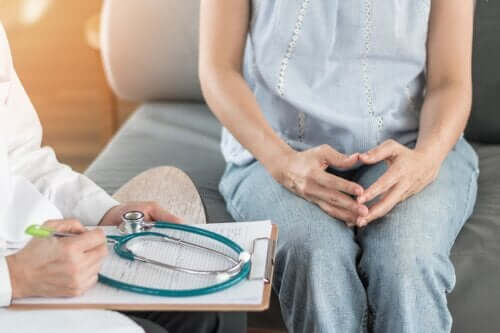 Endometriosis often goes away during menopause but sometimes it lingers and becomes serious. Each case develops in its own unique way, so a woman afflicted by this condition requires personalized medical attention to deal with it.

Endometriosis is the presence of endometrial tissue outside the cavity of the uterus, which is where it’s usually found. It’s a chronic painful disease that can last a lifetime. Today’s article will describe the symptoms and possible treatments.

The endometrial tissue, or endometrium, usually thickens and bleeds with every menstrual cycle. However, some tissues behave as if they were endometrial when a woman has endometriosis. Unfortunately, they have no way out of the body.

What happens in these cases is that the tissue becomes trapped. As a result, it eventually irritates, forms fibrous tissue, and the tissues and organs in the pelvic area stick together as a consequence. In turn, it increases inflammation and pain.

This disease specifically affects the ovaries, pelvic tissue, and fallopian tubes. In some cases, it can also impact the ligaments and the peritoneal surface, as well as the intestines and the bladder.

Often, the symptoms of this disease disappear during menopause. This is because the hormonal stimuli of the menstrual cycle are no longer present and, therefore, the ectopic endometrial tissue either decreases or disappears entirely. However, symptoms may return if a woman takes hormone replacements.

Women’s bodies stop producing estrogens (the hormones related to the development of endometriosis) around the age of 50. This hormonal change decreases the symptoms of this condition.

However, there are many instances in which this condition doesn’t go away with the arrival of menopause. Thus, a woman may continue to experience minor blood loss that forms fibroids in the ovary, Fallopian tubes, and so on.

Furthermore, endometriosis during menopause is more complicated. Medication doesn’t work in these cases and the symptoms are more severe. For this reason, women in this situation may opt for surgical intervention.

You may be interested in Risks and Symptoms of Endometriosis, a Silent Disease

One can treat endometriosis with hormones or surgery. It all depends on the specific location of the tissues. Pharmacological treatment is the most advisable, in most cases that seek to reduce pain.

This disease requires special care during menopause. Note that hormone replacement therapy could cause more pain in the pelvic area, and even bleeding.

Thus, you must take into account the pros and cons of these therapeutic options at the time of your gynecological consultation. In the case of extensive endometriosis, surgical treatment is advisable. The most commonly used procedures are:

Helpful information about endometriosis during menopause

Endometriosis is a benign disease that doesn’t lead to cancer in the vast majority of cases. Often, it manifests itself after menstruation begins and lasts throughout a woman’s fertile cycle.

Note that there have been reports of premenarchal girls with this condition and also cases of endometriosis during menopause and after it. As you can see, there are no definitive rules for this ailment.

Some people believe the disease could involve genetic, family, and environmental factors. Endometriosis can decrease a woman’s fertility rate since the thickening of the uterine tissues prevents the arrival of sperm to the ovum.

Consult your Ob/GYN if you have any symptoms that may warn you of this condition. They alone can determine the best treatment for your individual needs.

Risks and Symptoms of Endometriosis, a Silent Disease
The symptoms of endometriosis vary and are often hard to detect. The disease has also been found to increase risk of heart attack. Read more here. Read more »
Link copied!
Interesting Articles
Illnesses
Everything You Should Know about Hypochondriasis