Symptoms of Ovarian Pain During Menopause

Ovarian pain during menopause isn't physiological and may in fact be a sign of a possible tumor. 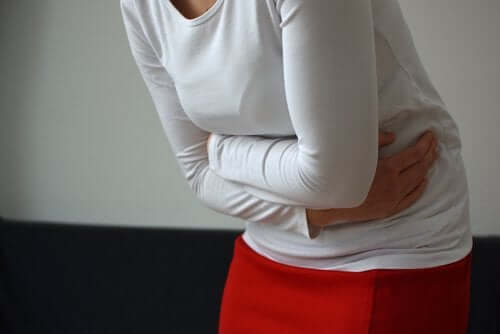 Women experience ovarian pain many times throughout their lives, most of the time during ovulation or menstruation. However, it may reappear during menopause even though there’s a misconception about it ending with this stage of a woman’s life begins.

This kind of pain happens in the lower abdomen and can be more or less intense, constant, or with a pulsating sensation. When it occurs during the menstrual cycle, it’s usually due to the inflammation of the ovaries during ovulation. So, it isn’t normal to have ovarian pain during menopause. This is because the ovaries are no longer active at this stage.

In today’s article, we’ll explain why ovarian pain can occur during menopause.

Women often confuse the arrival of menopause. It’s no wonder as many stop having their period and assume it’s due to menopause. This is usually perimenopause though. That is a stage of transition in which a woman doesn’t have a regular period, and it comes and goes because the ovaries are still active.

Ovulation is the first cause of ovarian pain during this stage. It occurs because the ovaries continue to function and swell as they did during the fertile stage. Ectopic pregnancies are another reason.

Also, pelvic inflammatory disease is a condition that causes ovarian pain and it’s usually a complication coming from a sexually transmitted disease. So, there may be other discomfort besides the pain. For instance, the symptoms might include smelly period blood and pain when urinating.

However, tumors are the most common cause and can either be benign or malignant. When a woman hasn’t had a period for more than a year and feels ovarian pain, then it’s very likely that it’s a tumor.

Other possible causes are:

You may be interested: Estrogen – An Essential Hormone for Women

Other symptoms of an ovarian tumor

As we mentioned above, ovarian pain can be a symptom of a tumor in this area. In addition, there are other symptoms that can alert you to this situation. For example, women may have difficulty eating and even be satisfied with very little food. Similarly, there are urinary symptoms such as a constant desire to pee.

However, these symptoms may occur in other diseases too. Having said that, the symptoms are usually persistent or more frequent when you’re dealing with an ovarian tumor. You must consult your doctor regardless.

In addition, you may feel more tired and have back pain and feel pain during sex. It can even affect your stomach and lead to swelling and constipation. Bleeding is an alarming sign, especially if you haven’t had a period for over a year.

You must consult a doctor to find out for sure if you have an ovarian tumor. They’ll need to know your entire medical history, including your family history. They’ll usually start their diagnosis with a pelvic and abdominal examination.

A doctor can perform a series of complementary tests in order to diagnose it. First, they’ll request an ultrasound and, with it, they’ll determine if there’s any excess tissue in your ovaries. And if there’s any, they’ll also have to determine whether it’s liquid or solid.

In addition to that, they’ll use a CT scan more frequently than resonance. This is because it helps them distinguish more clearly whether there’s a tumor or not. They might also do a biopsy.

So, to summarise, ovarian pain during menopause isn’t physiological and, as we’ve said, it may be a sign of a tumor. Therefore, you must see a doctor to explain your symptoms and ask questions. They’ll do any relevant tests to rule out a tumor. In fact, the earlier they make a diagnosis, the better.

7 Reasons You Might Feel Pain in Your Ovaries
Pain in your ovaries can come from many different factors. However, any pain related to the female reproductive system should be taken as a warning sign. Here are 7 possible reasons for your pain. Read more »
Link copied!
Interesting Articles
Health
Hormonal Changes in Menopause