The Hidden Benefits of Cinnamon Tea

Among the many benefits of cinnamon are its roles as an anti-inflammatory and antiseptic agent. It also helps you lose weight, because it increases the burning of fat. 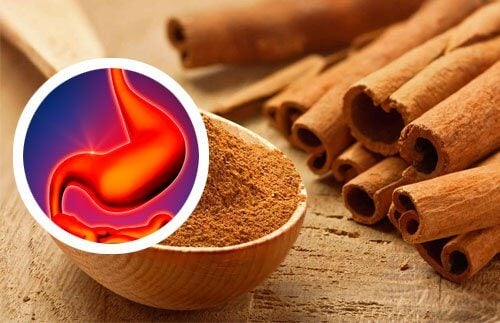 Cinnamon tea has been used since ancient times by many cultures for its numerous beneficial health properties. Among them are its ability to help detox the body, lower blood sugar, promote weight loss, regulate menstruation, and help fight indigestion.

In this article, we’ll take a look at the surprising hidden benefits of cinnamon tea.

The Properties of Cinnamon

Cinnamon is a spice that originates on the shores of the Indian Ocean. Specifically, it comes from the island of Sri Lanka, south of India. The most well-known aspect of cinnamon is its smell, which is known for its relaxing properties as well as its use in various cleaning, health, and beauty products.

This exotic spice is a rich source of magnesium, iron, calcium, fiber, and vitamins C and B1. It’s an effective treatment for diarrhea, indigestion, bloating, and can even boost the immune system. It’s also used as an expectorant and can relieve problematic respiratory symptoms.

Here are just a few of the amazing benefits of cinnamon:

The Health Benefits of Cinnamon Tea

Cinnamon is a spice with many excellent qualities that you can obtain from your daily diet in a variety of ways.

However, one of the best ways to consume cinnamon is in tea. This way you preserve all the active components of the spice without any interference from other foods. Furthermore, it’s easier for the digestive system to absorb cinnamon tea, meaning you see the benefits in a shorter amount of time.

People with Type II diabetes (a condition that occurs when the body fails to respond normally to an increase in insulin, generating high levels of blood sugar)benefit the most from cinnamon. One cup of this tea can help stabilize blood sugar levels.

Vitamin B1 stimulates insulin receptors and inhibits the enzyme that activates them. This increases the body’s ability to process glucose naturally.

The Most Effective Natural Remedies for Diabetes

The same qualities that make cinnamon tea a good choice for diabetics also make it useful for weight loss.

When you eat more than your body needs, the pancreas overcompensates to produce more insulin. That extra insulin tells your body there’s a lot more energy available for it. However, once your energy needs are met, the insulin stores all the extra glucose, or sugars, in your body for use later.

Because cinnamon tea reduces your levels of blood sugar, there’s less insulin in your whole system, which causes the body to store less fat and lose weight.

One advantage of using this tea for weight loss is that you’ll notice good results very quickly. Just drink two cups a day: one in the morning and one in the afternoon.

It’s good for your stomach

Cinnamon tea is also good for your digestive system.

It reduces gases in the stomach, helps prevent ulcers from forming, and prevents vomiting and nausea. Generally speaking, your food will be digested more easily thanks to cinnamon’s stimulating effects on the production of saliva and stomach acids.

Likewise, cinnamon naturally controls diarrhea and regulates your intestinal rhythm. Because of this, it’s recommended for anyone suffering from irritable bowel syndrome. It also helps prevent inflammation of the intestines and triggers your appetite.

Cinnamon contains dietary fiber, iron, and calcium, which combine with bile salts and help remove them from the body. These salts can be harmful to the colon if not eliminated properly.

7 Things to Never Do on an Empty Stomach

Drinking cinnamon tea is a great home remedy for regulating your menstrual cycle, thanks to its anticoagulant properties.

This has two effects: first, it can trigger the start of your period if you’re a little late. Second, it has an analgesic effect and reduces pain during this stage.

It’s been found that cinnamon tea can reduce the levels of cholesterol and triglycerides in the blood. This prevents the formation of atheromas and thrombi, which slow down blood flow.

It fights the common cold and flu

When flu season arrives, cinnamon tea can be one of your best allies. Chinese medicine has long used this tea to treat illnesses.

Cinnamon is also an antibiotic, reduces inflammation, lowers fever, reduces coughing, and it tastes great! Furthermore, it provides relief from headaches and migraines.

Don’t forget that while cinnamon tea has many wonderful benefits, you shouldn’t drink too much of it. For this reason, we recommend you talk with your doctor before you start the cinnamon tea regimen to be sure it’s going to complement any other medication or weight loss regimen you’re following.

In some cases, you should avoid consuming cinnamon because many of these wonderful properties can actually have negative effects on your health.

Don’t drink too much of it

Coumarin is a toxic compound that’s found in cinnamon. In high doses, it can cause damage to the liver and kidneys, so don’t apply it too liberally to your food.

During pregnancy, it’s important to avoid consuming cinnamon. This is because it stimulates blood flow and can cause the uterus to contract. This can be detrimental to the fetus. Similarly, nursing mothers should avoid cinnamon tea because it can cause an allergy to develop in the baby.

Avoid cinnamon if you have ulcers

When you have ulcers of the stomach or intestine, consuming cinnamon will only irritate them more. It’s best to avoid it entirely in this case.

Be careful with your heart

Don’t combine it with antibiotics

Cinnamon is a natural antibiotic. Therefore, its properties could interfere with the way other medications work and cause unpredictable side effects. Avoid it any time you’re taking a regular prescription antibiotic.

It’s easy to make this slimming cinnamon tea – here’s all you need:

The ingredients you need are:

Cinnamon tea for colds and flu

All you need is:

Scientists Discover Nanoparticles from Tea Leaves that Kill Lung Cancer Cells
%%excerpt%% Research carried out in India and at the University of Swansea in the UK has discovered that nanoparticles from tea leaves can kill cancer cells. Read more »
Link copied!
Interesting Articles
Did you know?
Vegan Meat Substitutes: What Are the Best Options?