Have You Been Unfaithful? This Is What You Should Do

When one half of a relationship is unfaithful, both have to reflect on it and take time to think about what they really want, and then act accordingly. 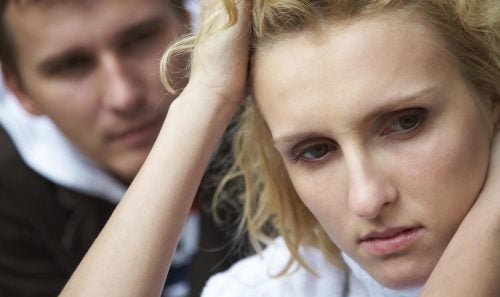 If you have been unfaithful, now is not the time for assigning blame. It’s time to become aware of and take charge of something that was built on love.

However, when someone is unfaithful, the fear of losing the other makes them act in very unhelpful ways. Unfortunately, this can lead to their desire never becoming reality.

Even if you’ve never cheated on your partner, what we have to say below will be good for you and allow you to understand why people act how they do.

If you’ve been unfaithful, take responsibility

Some people they hide it when they’re unfaithful so the relationship isn’t hurt. However, they pay a hefty price in the lack of honesty.

No matter what, it’s important to take responsibility for it and tell the other person. After all, if you love them, you must always be completely honest.

Another thing that happens a lot is blaming the other person for the infidelity. Saying things like, “Well, we aren’t having sex as often as before” or “It’s just that we’re cold now” can make the other person feel guilty.

It shouldn’t be like this. It’s a clear attempt at manipulation and lack of responsibility to acknowledge who it really was that messed up.

Learn 5 Affirmations that Can Help You Forgive Yourself

After infidelity, distance yourself

Sometimes, people who have cheated prevent their significant other from getting some distance and taking time to think. They’re afraid they will lose them and are desperate to be forgiven.

That’s when they pressure them to make an immediate decision about the relationship. They beg they get on their knees, they cry… All of this is just another attempt at manipulation.

After a crisis, you have to take some space. This is so the other person can gain perspective on what happened and have the freedom to make the best decision.

The person who has been unfaithful needs the space to put their thoughts in order, too. Reflect on why you cheated and consider why your current relationship may not have been fulfilling you.

It’s important to be clear regarding certain aspects in order to decide if you should close this chapter and start another.

The real problem comes when you deny it because romantic love – or the “forever after” – is so engraved in your heart that you can’t wrap your mind around the fact that you may have thrown a relationship away with a single mistake.

You’re afraid to acknowledge that things aren’t working anymore. Therefore, you continue in a relationship that’s crumbling underneath you.

Don’t miss: Promising to Change: Will it Get Your Relationship Back?

The importance of accepting mistakes

We all make mistakes. Some affect only you, while others also have a significant impact on others.

Be that as it may, after infidelity, you have to learn to accept the mistake. That way, you can get rid of the guilt and stop trying to manipulate the other person to stay.

After all, if they want to leave the relationship, it’s their right. You should accept it without trying to change their mind.

In addition, you should be aware that the relationship will never be like it used to be. Everything changes after a mistake like this and you should remember that.

Being unfaithful is something that may happen, but taking responsibility for it and not trying to convince the other person to give you a second chance is very important.

Give them space to reflect and decide what it is that they want, while you assume the consequences for what you did.

Interesting Articles
Illnesses
What Are the Types of Cerebral Palsy?

Brassicaceae, also known as Cruciferae is one of the healthiest vegetables in the world. This is because this group has…