Find Out How the Eye Cleans Itself

A novel study about eye function recently discovered how the eye cleans itself. This system is similar to one the brain uses to eliminate toxic substances. Continue reading to find out more about it. 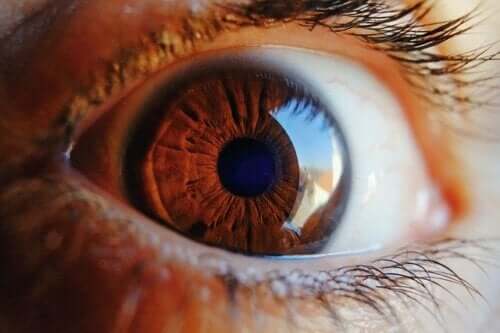 Through experiments on mice, scientists have discovered how the eye cleans itself using a toxin removal system. What this discovery revealed is this self-cleaning mechanism is similar to the drainage one used by the brain.

Similarly, other organs also have techniques to eliminate toxins and protect themselves. The brain is one of the best-known ones. In fact, the research on it provides hope for the treatment and prevention of Parkinson’s disease and Alzheimer’s.

The journal Science Translational Medicine published a new article about the eye. In it, the authors explain that knowing how the eye self-cleanses is one more step in understanding glaucoma. You may not know it but glaucoma could lead to blindness.

The new study on how the eye cleans itself

The research we mentioned above was performed on mice due to the similarity of their ocular structure. The scientists injected them with a substance in order to track it and find out how the eye got rid of it.

Thus, they discovered the existence of an alternative route to traditional drainage routes. That is, we already know the eye uses the lymphatic system, like many other organs, to eliminate waste. However, this is a different mechanism.

Scientists observed how amyloid substances left the eyeball through an internal channel called AQP4 (aquaporin-4). This aquaporin is the same that other researchers discovered in the human brain a while ago.

In addition to observing how the eye cleans itself, the researchers made-up various scenarios in which they check if the drainage increased or decreased. They performed various tests, some involved direct light exposure to the retinas, while others involved an atropine injection.

Finally, they compared normal eyeballs and eyeballs with glaucoma. What they found was a direct application of this discovery as the mice with glaucoma showed an alteration in their drainage system.

What happens with glaucoma?

Glaucoma is a disease characterized by increased intraocular pressure. One can measure this pressure, and this measurement yields a conventional value on the force exerted by the aqueous humor of the eyeball.

In normal situations, the aqueous humor inside the eye happens right there and circulates until it drains and leaves the orbital system. This flow is constant and ensures the liquid is free of toxic substances that would otherwise damage vision.

When, for some reason, there’s no proper drainage of the aqueous humor, it builds up and increases intraocular pressure. Also, it might produce more than the system can drain, and so the end result is the same.

A person with glaucoma gradually feels how their vision becomes less acute. Thus, they consult an ophthalmologist, who measures intraocular pressure, makes a diagnosis, and explains the therapeutic options to consider.

You might be able to prevent glaucoma just by reading the scientific study we’re discussing here on how the eye cleans itself. Early detection of a drainage failure can improve the circulation of the aqueous humor.

Find out more: It’s Possible to Detect Alzheimer’s Through the Eyes

This novel discovery is linked to the brain cleansing system that a research group discovered years ago. The glymphatic system is named so because it works like lymph but mediated by glial cells of the nervous system.

The traditional lymphatic system that cleanses the organs is present in the brain, and also in the eye, but it eliminates toxins slowly. These lymphatic systems are faster and more specialized though. This is why they deal with specific toxins.

The eye and brain are supposed to have lymph systems because they’re high metabolism organs. What this means is their cells work at high speed and therefore produce a lot of waste that wouldn’t accumulate otherwise.

In the case of the brain, the system regulates by pulse and heart rate, as well as by sleep. During the night, certain movements of contraction and expansion of the brain tissue begin to clean and remove the waste.

The impact of knowing how the eye cleans itself

The aforementioned researchers have connected their discovery to glaucoma disease. Future research is necessary to continue moving forward though, but it’s promising to know how the eye cleans itself.

In fact, they would have some solution before glaucoma begins to damage vision if it were possible to identify lymphatic system flaws early. This is because it would save problems for millions of people with this disease as they would get a timely diagnosis.

How Prevent Cataracts Naturally
Cataracts are a very unpleasant occurrence in our vision. In this article we'll look at how to treat and prevent cataracts in a natural way. Read more »
Link copied!
Interesting Articles
Anatomy and physiology
Why Are Some People More Sensitive to Pain than Others?