Fibromuscular dysplasia can often be difficult to diagnose because many patients don't manifest any symptoms. Today, we'll tell you more about the diagnosis and treatment of this disease. 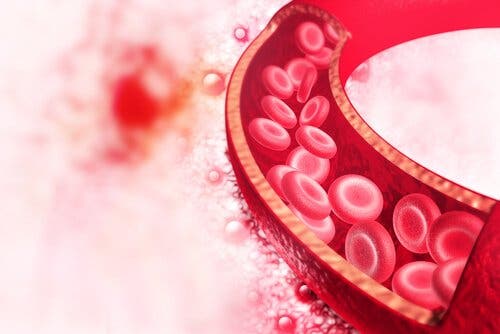 Fibromuscular dysplasia is a disease that causes one or more arteries in the body to develop abnormally. And, as a result, this abnormal development affects the walls of these large vessels, leading to a variety of consequences. For example, a narrowing of the vessels– a condition known as stenosis–, aneurysms, or tearing (arterial dissection).

Narrowing and tearing can cause a decrease in an artery’s blood flow. Consequently, this can lead to a series of symptoms which we’ll look at in detail in the following article. Fibromuscular dysplasia especially affects the arteries that supply blood to the kidneys and the brain.

At the same time, it’s important to point out that this illness affects many more women than it does men. However, men, as well as some children, can also suffer from the disease.

Furthermore, it’s difficult to determine just how common this illness is in the general population. The reason for this is that patients with mild fibromuscular dysplasia often don’t display any symptoms. As a result, their condition goes undetected.

The causes of fibromuscular dysplasia

Currently, experts are unaware of what exactly leads to fibromuscular dysplasia. However, there are several theories on the subject:

For one, some theories suggest the existence of a genetic cause. However, the condition can affect the arteries of different family members in different ways. What’s more, the severity of the disease can vary, and some family members may not develop it at all.

At the same time, as we mentioned, the disease is much more common in women than men. Therefore, some theories suggest that hormones may play a fundamental role in the development of this disease. However, some studies also suggest that the use of birth control pills seems to have no relationship with dysplasia. And finally, other possible causes include:

One of the biggest problems when it comes to diagnosing this illness is that many patients don’t display any symptoms. However, the symptoms that some patients do manifest will depend on which arteries are affected. At the same time, symptoms will depend on whether or not narrowing, tearing, or aneurysms are present in the affected arteries.

Any pain or clinical symptom having to do with the disease originates from the organ that the affected artery carries blood to. In that sense, some of the possible symptoms of fibromuscular dysplasia include the following:

It’s important to remember that, as we’ve mentioned, the symptoms that a given patient experiences will depend on which artery the disease affects.

The diagnosis of fibromuscular dysplasia

The diagnosis of fibromuscular dysplasia consists of an image exploration of the blood vessels. Today, there are many different techniques that allow specialists to perform this diagnostic testing, including:

In many cases, in order to diagnose this disease, doctors must utilize a procedure known as an arteriogram or angiography. A radiologist, vascular surgeon, cardiologist, or a specialist in vascular medicine must perform the procedure.

You may also want to read: Broad-Spectrum Antibiotics

Currently, there’s no cure for fibromuscular dysplasia. Therefore, the treatment of this condition focuses on relieving symptoms and reducing complications.

Some pharmaceuticals that serve these purpose are:

At the same time, it’s worth mentioning that, in some cases, attempts should be made to improve blood flow through narrow vessels. Specialists usually utilize procedures like balloon angioplasty or percutaneous transluminal angioplasty (PTA).

However, the choosing of these procedures will depend on the affected arteries, the presence of symptoms, and their severity.

Aortic Dissection: What It is and What Causes it
Aortic dissection is a tear that requires immediate intervention. Here are the symptoms and some possible strategies for prevention.  Read more »
Link copied!
Interesting Articles
Illnesses
What Are the Types of Cerebral Palsy?

Beauty
The Properties and Benefits of Chamomile Tea

Chamomile tea is a natural infusion that became popular thanks to its interesting medicinal applications. While many of its uses…

Are you looking for quick and nutritious meals? If so, be sure to try the following recipes with tuna. Believe…

Dragon fruit is the fruit of the cactus Hylocereus cacteus. It comes from the south of Mexico and Central America,…