Exercises for a Herniated Disc

Exercises for a herniated disc are varied and adapt to each case. As you’ll see in this article, it isn’t the same to suffer from this disorder in the lumbar spine than in the cervical spine. 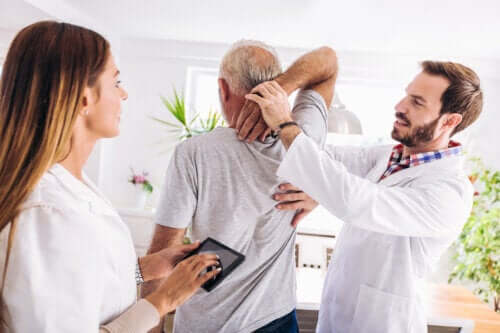 Doing exercises for a herniated disc is one of the medical indications that accompany the treatment approach for this condition. Health professionals agree on the importance of physical activity for these patients.

A herniated disc has different forms of presentation, according to its location in the spine. Similarly, the degrees of severity and the accompanying symptoms vary.

Read on to find out more!

The types of a herniated disc

A herniated disc is a protrusion of the intervertebral disc out of the spine’s axis. This abnormal position of the anatomical structure comes into contact with other tissues that, in the end, are the ones that determine the symptoms.

The entire length of the spine can herniate. Therefore, the location helps classify the condition, which can be cervical, thoracic, or lumbar. The first and last are by far the most common.

If you think of your spine as a stack of vertebrae, you’ll understand that something must be placed between them to act as a shock absorber. That “something” is intervertebral discs, formed by more fibrous capsules and a soft center that absorbs impacts.

The discs are located between the bony vertebral bodies and maintain a central position in the back that respects the limits the bones impose. When one of the discs protrudes to the side due to a herniation, the internal balance is lost and the nerves become inflamed, due to proximity.

We can classify the following types with their symptoms:

Keep reading: How to Distinguish a Herniated Disc from Common Back Pain

Exercises for a herniated disc

As we explained above, there are different types of herniated discs. Thus, we’ll divide the recommended exercises according to the location.

In this case, self-massage of the neck seems to have the most scientific evidence in its favor. When a person consults a doctor for this ailment, they often indicate physiotherapy and the physical therapist teaches the patient to massage themselves at home.

It’s convenient to consider that, beyond the specific technique, the use of the fingers and the circular direction of movement also matter. Patients can do these self-massages at any time, during work breaks, when they’re watching television, or during any relaxation moment.

Also, anaerobic physical activity in the gym isn’t a bad option. Experts usually recommend starting it once the acute pain has subsided. The goal is to tone the muscles of your neck that support your spine. This way, you increase the balance of your spine.

The muscles that are worked are the paravertebral muscles, in positions that don’t cause pain. You should be careful with weights, as the impingements of the cervical herniated disc reduce the strength of the upper limbs, which can lead to accidents when you’re holding weights or dumbbells.

Thoracic disc herniation is poorly understood. In fact, many people may assume that the disorder can’t exist at this level in the spine. However, not only does it exist – it’s more complicated to treat than the others.

The recommended exercises are active and progressive. Physical therapists indicate exercise routines focused on stability and strength. Thus, it’s common for them to insist on static positions for proprioception.

As the patient recovers and strengthens their muscles, they can try out new routines. For this injury, professional accompaniment is vital.

Find out more here: Symptoms of a Herniated Disc

Typical lumbociatalgia is a sign of lumbar disc herniation. It begins with lower back pain that radiates down the path of the sciatic nerve to the groin, thigh, and big toe.

Experts recommend accompanying the exercises with heat therapy so that the muscle fibers surrounding the injury which are almost always affected by muscle contractures can relax. This is the body’s response to injury.

Stretching is essential and should be repetitive. The lower limbs have to reach their maximum amplitude, within each patient’s possibilities, to release nerve pinching. When it comes to the workplace, it’s important to create active rest spaces.

It’s helpful to use gym balls for variations of the plank exercise and to strengthen the core. As in the neck, the goal is to increase the strength of the surrounding tissues to support the balance of the spine.

Exercises for a herniated disc are an alternative to the use of painkillers. Although they help relieve pain, it’s best to avoid overusing them.

Following an exercise plan and leading an active life can make it possible for most patients to manage a herniated disc. Therefore, if you’re suffering from one, it’s best to go see a physical therapist for guidance on the best options for you.

Symptoms of Degenerative Disc Disease
As you age, your vertebral discs deteriorate. This can lead to degenerative disc disease in some people. Read more »
Link copied!
Interesting Articles
Exercise and sports
Options for Creating Your Own Punching Bag at Home

Exercise and sports
The Differences Between Karate and Taekwondo

Karate and taekwondo are two commonly practiced martial arts that can be difficult to tell apart at first glance. They're…