Tremors in the upper and lower limbs is a symptom of various diseases. One of them is essential tremor. In this article, we tell you all about it! 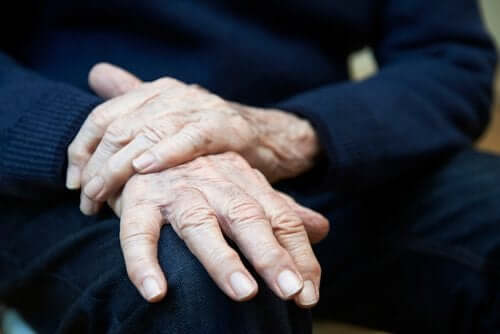 Overall, the most affected age group is people over sixty-five. However, experts consider that the most common age of onset of the first symptoms is between ages forty and sixty. However, there have also been cases of infants.

Essential tremor is characterized by involuntary movements that manifest as persistent shaking. The tremors occur mainly in the upper limbs: hands and arms. The episodes usually occur symmetrically and with pauses. It’s a chronic situation that continues over time. However, it doesn’t manifest throughout the day and sometimes doesn’t even manifest every day.

Essential tremor isn’t life-threatening and isn’t associated with cognitive impairment or nervous system degeneration. However, although it’s cataloged as benign, it’s very bothersome. After all, this disorder also affects the patient’s ability to do many daily life activities. This includes writing, having a cup of tea, or tying shoes.

There aren’t enough scientific studies on the disorder to be able to determine the cause of the disease. This is because it’s a benign condition that progresses slowly.

However, it’s known that essential tremor is an alteration in the nervous system connections in the nuclei of movement. The thalamus, nigrostriatal pathway, and the cerebellum are parts of the nervous system responsible for regulating bodily movements. The scientific hypothesis is that essential tremor makes some of these regions undergo an abnormal change that ultimately produces involuntary movements.


The existence of familial cases, where parents and children suffer from essential tremor, primarily confirms a genetic component of the disorder. In fact, people also know this condition as “family tremor”.

This article may interest you: Auriculotherapy to Fight Parkinson’s Disease

In addition to this key sign, which is upper limb tremors, here are the other symptoms of the condition:

If left untreated, symptoms tend to worsen with age. In fact, it’s been shown that the symptoms worsen and become more repetitive when a person consumes a lot of caffeine. Also, this happens in stressful situations or after a bad night’s sleep.

First of all, we should clarify that there’s no cure for essential tremor. Typically, the hygienic-dietary measure doctors indicate is to stop consuming caffeine. Also, medical professionals recommend various courses of action for stress, such as psychotherapy or sleeping pills.

Plus, some patients benefit from physical therapy and kinesiotherapy sessions aimed at improving muscle control, coordination, and balance.

Regarding the use of drug treatment, the following drugs are the most widely used and have the most scientific evidence:

Finally, if the above treatments don’t work, medical professionals may indicate more complex treatments. However, they save these for patients with very low drug response and an invalidating clinical picture.

Overall, here are some other last-resort therapeutic options:

9 Health Problems That Our Hands Show Us
Observing the condition and appearance of our hands can give us some clues about our general health and enable us to get an early diagnosis of different conditions Read more »
Link copied!
Interesting Articles
Illnesses
Discover How Diabetes Affects Eyesight