Parkinson's disease is a degenerative disorder of the central nervous system (the brain and spinal cord). 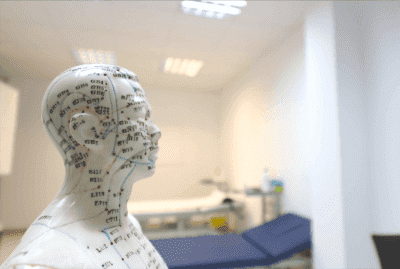 While there’s currently no cure for Parkinson’s disease, some new treatments have emerged. One of these treatments is auriculotherapy.

It’s well known that the drugs people use to treat Parkinson’s disease aren’t curative. In addition, their dosages almost always have to be increased at some point in the patient’s life. However, unfortunately, this typically doesn’t translate into a better quality of life for patients – which is the main priority.

Discovered in Germany in 2001, this therapy is suitable to treat Parkinson’s and other neurodegenerative diseases. These include multiple sclerosis, restless leg syndrome, vascular dementia, Pick’s disease, and Alzheimer’s, among others.

So, what does it consist of? Well, it consists of the implantation of titanium micro implants in the cartilage of the ear.

In other words, after an assessment of the patient’s health, the professional proceeds to implant small and fine titanium needles in the cartilage of the ear.

Overall, it’s a completely painless procedure that has no side effects. It has already improved the quality of life of more than 5,000 people worldwide.

First, to understand just how huge this achievement is, you have to remember how Parkinson’s manifests itself. This disease occurs when the neurons don’t produce enough dopamine, due to the deterioration of the substantia nigra of the brain, among other factors.

This results in a motor impairment that gradually begins to affect the person’s movements. In short, this means that people affected by Parkinson’s disease become slower, and lose flexibility, coordination and balance.

This is why the starting point of this particular treatment is the auricular cartilage, which has numerous nerve endings. Doctors insert needles under the skin using a specially adapted pressure system to activate the body’s own mechanisms that had been paralyzed. This helps to regulate the production of dopamine and/or other neurotransmitters. This technique is also known as auricular therapy, ear acupuncture, or auriculoacupuncture.

The success of auricular implantology is in its ability to create a permanent, natural stimulus that can reduce symptoms and slow the progression of the disease.

Overall, doctors take several main factors into account before the implantation. These include the patient’s symptoms, psychological state, severity of the illness, and the medication they’ve taken up to that point.

Evolution of the treatment

Over the years, medical professionals have systematically perfected auriculotherapy. In addition, today, it offers a much wider spectrum of microimplantation points, depending on the symptoms of the individual patient. Thus, it’s now possible to provide a more personalized treatment plan.

Unlike traditional acupuncture, this treatment allows you to insert many more needles in a single session.

It’s important to mention that the titanium needles are permanently implanted in the cartilage tissue. Thus, the patients don’t have to replace them. However, they do have to attend regular follow-up appointments.

Note: no matter what, it’s essential to examine the patient to determine the number of needles they need.

Locate these Nine Pressure Points that Will Help You Relieve Pain

Patients with Parkinson’s disease who have already received auriculotherapy say that they have experienced the following benefits (among others):

You can find testimonials from some patients here.

Overall, the Center for Neuroregenerative Medicine has been treating patients worldwide in a fully personalized way for fifteen years. Furthermore, the center is always carrying out cutting-edge research, which helps to maintain the quality of the treatment itself, and ensures that doctors stay up-to-date with the latest advancements.

Experts at the Parkinson’s Association in Madrid have stated the following in relation to the treatment of this disease:

“Treatment is only designed to improve symptoms caused by the loss of neurons. As a result, those suffering from Parkinson’s disease will require medication for the rest of their life, following the dosage and combination of medications recommended by their neurologist for their particular case.”

As such, auriculotherapy is designed as a complementary therapy, to be used alongside the treatment prescribed by the attending doctor.

Anatomy of Dementia: How is The Life of a Demented Patient?
The life of a demented patient isn't easy for themselves nor for their family. Today, we'll discover the problems a person with dementia has to deal with. Read more »
Link copied!
Interesting Articles
Treatments
Advantages and Disadvantages of LASIK Surgery