Alzheimer's disease is a common condition that causes dementia. Although dementia is the most known symptom, it can also cause changes in the sleep patterns of patients. 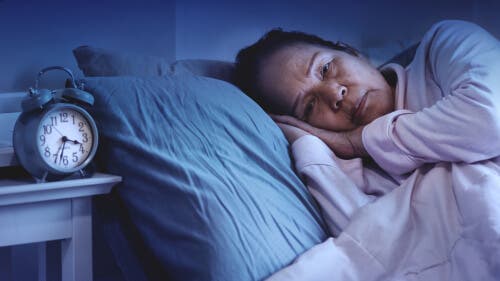 Alzheimer’s disease is the leading cause of dementia in the world. Among the many other symptoms, it can cause are sleep disorders. Overall, it’s common for different stages of the disease to cause changes in sleep patterns and quality.

In this article, we’ll tell you about the most common sleep changes that people with Alzheimer’s disease may suffer from.

What is Alzheimer’s disease?

Alzheimer’s disease is the most commonly occurring dementia in the world population. Around the world, about 48 million people suffer from it. Plus, given the increase in life expectancy, it’s estimated that the cases will increase a lot in the next few years.

By definition, it causes a cognitive deterioration that affects the normal life of the person, either in a personal, social, or work environment. In this condition, protein deposits form in and around the neurons, as well as cell death and failures in neuronal communication.

Clinically, the disease causes memory loss. This is the main symptom, and for good reason, but it can manifest itself in many other ways. Some of the symptoms that accompany memory loss are changes in language and behavior. This can also imply a loss of sleep.

Normally, sleep disorders evolve along with the disease. However, the type of changes and the impact they have on the patient have to do with the type of person, and the stage of the disease they are in.

Sleep changes in Alzheimer’s disease can be divided into different types:

Alzheimer’s disease causes a change in your biological rhythms. This evolves along with the disease, making it more noticeable as the disease advances.

The fact that your biological rhythms change causes drowsiness throughout the day. Patients may doze during the day and need to take naps. This can cause social problems to increase since it becomes harder to maintain conversations and relate with people normally.

Additionally, this drowsiness and sleeping during the day can cause the person to be less sleepy at night. This can cause them to wake up more, be restless, and walk around the house.

One specific change in biological rhythms is sundown syndrome or “sundowning.” In it, patients with dementia start to experience worse symptoms near the end of the day, especially in behavior. Their restlessness and agitation may increase.

In addition to restlessness and nervousness, they may suffer hallucinations, delusions, inexplicable fear, or even fits of rage. Up to 20% of patients with dementia have episodes of this syndrome.

What to do about sleep

Although it’s the most known symptom of the disease, Alzheimer’s doesn’t just show itself in memory loss. Many symptoms can accompany the disorder, and they can show themselves differently in each patient. As always, it’s extremely important for each person to get a proper diagnosis, go to their checkups, and tell their doctor about all the symptoms they experience.

For each case, a specialist should be the one to decide what the best treatment is. With this type of disease, they may have to adjust the treatment several times to have the best effect.

Improve Your Sleep Quality with these Healthy Bedtime Habits
Sleep influences both your physical and emotional well-being. So, you must adopt and follow healthy bedtime habits such as avoiding watching TV or playing with your cellphone. It'll for sure improve the quality of your sleep. Continue reading to find out more. Read more »
Link copied!
Interesting Articles
Illnesses
Excessive Appetite: What Are Its Causes?