When uric acid accumulates in the body, it can crystallize in the joints causing inflammation. Eliminate uric acid crystals naturally with this remedy. 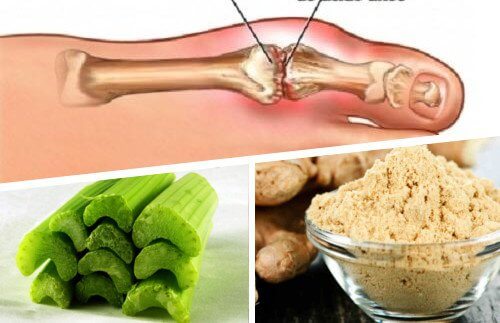 Often, a poor diet based on red meats, organ meat, and anchovies can cause this common problem in which the body is unable to get rid of excess purines. Research shows that uric acid is the final product of your body metabolizing nucleoproteins, or purines.

Little by little, small crystals of uric acid are formed and accumulate in your joints, causing pain and inflammation.

In the most serious cases, gout often appears with the classic swelling of the big toe that causes a lot of discomfort.

How can this condition be avoided? How can we reduce uric acid levels? First, you should visit your doctor so they can recommend the best treatment for your situation. Today, we’d like to share a simple remedy with you that you should talk to your doctor about before trying. Combined with a balanced diet and some healthier habits and exercise, it could make you feel much better. Check it out!

These natural ingredients are truly medicinal and will combat uric acid crystals. Want to know how?

Cucumbers are considered diuretic and hydrating which makes them great for eliminating excess uric acid in the blood, though there’s no scientific evidence to support that claim. This vegetable is really low in fat and is the perfect complement to any diet. It’s delicious and goes well in salads as well as this medicinal shake.

Celery refreshes and hydrates the body. Its unique flavor goes well with many dishes. You can use it in broths, salads, combine it with meats and create rich and medicinal juices like the one we’re sharing with you today.

You should know that celery is great for lowering bad cholesterol as well as flushing the excess uric acid, though there isn’t hard scientific evidence to back up this claim. Many people believe that it cleanses the body, is diuretic and works to stimulate the liver and its functions. As you can see, you should always have this vegetable on hand in your home.

As we’ve often mentioned on our site, this medicinal root is regularly used to fight pain and inflammation. But did you know it’s also a popular folk remedy for treating gout and inflammation of the joints?

According to a study completed in January 2010 and published in Food and Chemical Toxicology magazine, ginger is rich in a chemical compound known as 6-shogaol. This compound reduces the inflammation caused by uric acid crystals.

So if you don’t have fresh ginger on hand, get to the store and buy some to make this medicinal remedy.

How much water do you usually drink a day? Remember that in order to fight uric acid, you need to cleanse the body and flush the harmful toxins that are making you sick.

While we don’t have scientific evidence to prove this, many people believe that the alkalizing properties of lemon can reduce excess uric acid crystals that accumulate around the joints.

Lemons are also rich in vitamins and minerals, making them the perfect ally for your health.

When should you drink this natural remedy? Just after lunch. This way it will help promote digestion and do a much better job of cleansing the body of uric acid and the crystals that form in the joints. It will also help optimize your liver function, which will help reduce joint inflammation.

Remember that there’s no scientific evidence to back up these claims, so make sure to talk to your doctor for effective treatment.

Discover the 5 Benefits of Ginger Water
%%excerpt%% Ginger water stands out for helping to stimulate the function of the pancreas and the digestive system. It's also high in Vitamins C and B6. Read more »
Link copied! Next
Interesting Articles
Natural remedies
4 Science-Backed Spice-Based Remedies