Dyspareunia or Coitalgia: Causes and Treatments

Dyspareunia is a term used to refer to pain during sex. This pathology can be due to a physical imbalance, but is also associated with psychological processes. 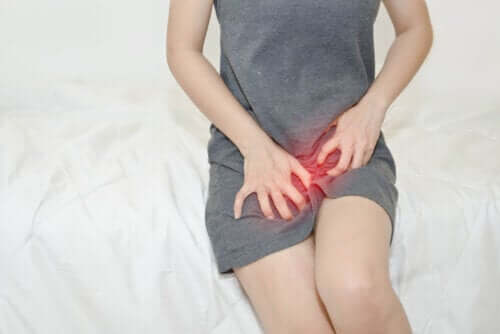 Dyspareunia, or coitalgia, is a condition that causes various unpleasant symptoms related to sexual intercourse, both in men and women. This disorder, in its least serious state, can involve slight genital irritation or even extreme pain before, during, or after intercourse.

Several medical studies indicate that this condition is much more common in women, but it can also occur in men, generally due to urethral infections or phimosis. If you want to find out more about the possible treatments and causes of dyspareunia, or coitalgia, read on.

Dyspareunia around the world

The sexual act is taboo in many social areas and cultures. Therefore, it’s important to note that coitalgia is much more common than you may think. The World Health Organization (WHO) and different epidemiological studies provide the following data regarding painful sexual intercourse:

As you can see, painful sexual relations are common in the general population, especially in women.

Not feeling pleasure while having sex is not the norm. So, seeing a doctor and/or professional because of this lack of enjoyment is completely legitimate and necessary.

Get to know more: What’s Sex After a Hysterectomy Like?

As we’ve already said, dyspareunia is the pain experienced in the genitals or pelvic area, associated with sexual practices. It can even occur up to 24 hours after sex. Some of the most common symptoms, reported by medical organizations, are the following:

Most of the symptoms are associated with women’s experiences. In men, as we’ve already said, it’s much less common. Even so, when it does occur, it’s usually only at the time of ejaculation.

To address the causes of this condition, we need to divide it into two categories: physical and psychological. We’ll explain these both below.

The physical causes of dyspareunia are multiple and varied. For example, clinical studies have shown that this condition is very common after childbirth, like the tearing of the pelvic musculature, and the pressure that the vagina has been under will increase its sensitivity.

Although it may seem surprising, in nursing mothers, researchers have also observed that coitalgia is linked to decreased levels of estrogen in the blood. This happens because hormonal imbalances lead to dryness in the vagina.

Other physical causes of dyspareunia in women are the following:

Again, we must reiterate that most of these cases have been studied in women. Other research states that dyspareunia, or male coitalgia, is often associated with an obstruction of the ejaculatory duct. Pathologies such as chronic prostatitis can produce pelvic discomfort in men.

This condition doesn’t only have to do with the body. The research we’ve already mentioned estimates that more than 70% of the cases of dyspareunia don’t show any type of physical cause.

This highlights the large psychosexual component in this disorder. Some of the psychological parameters that can play an essential role are the following:

What treatment is available?

Thankfully, there are medical treatments available to treat dyspareunia or coitalgia. For example, if the pain is due to a fungal or bacterial infection, then the patient will need to apply antifungal or antibiotic medication. Doctors may prescribe topical estrogen to postmenopausal or lactating women to promote vaginal lubrication.

The causes are so varied that doctors must tailor treatment to each patient. A common help for all sufferers is couples therapy and some type of sex education.

As we’ve seen, dyspareunia is linked to the psychological side of the patient. In this sense, comfort, safety, and prior arousal are essential to avoid pain during sexual intercourse.

Wanting to feel pleasure is not a reason to feel embarrassment or vulnerability. We recommend talking to your partner as a first essential step to improving the situation.

You may be interested in: Testicular Torsion: Symptoms and Causes

Pain during sex: Some conclusions

Pain during sex is quite common, especially in women, where it can occur in 30% of the population at certain ages. Therefore, communication with your partner is vital. Changing sexual positions, using lubricants, and avoiding stress are always good options to avoid dyspareunia.

Even so, not all cases correspond to psychological problems. Coitalgia can be a sign of an obstruction of the ejaculatory duct in men or fungal infections in women. Because of this, it’s clear that this condition requires both a medical and psychological approach.

How to Prevent Pain During Sex
If you feel pain during sex, in this article, we share some recommendations so that you can begin to enjoy much more pleasant sex. Read more »
Link copied!
Interesting Articles
Health and sexuality
5 Types of Sexual Orientation