Do You Know the Difference between Identical and Fraternal Twins?

Knowing the difference between twins and twins is essential to understanding them and knowing what precautions the mother should take during pregnancy. 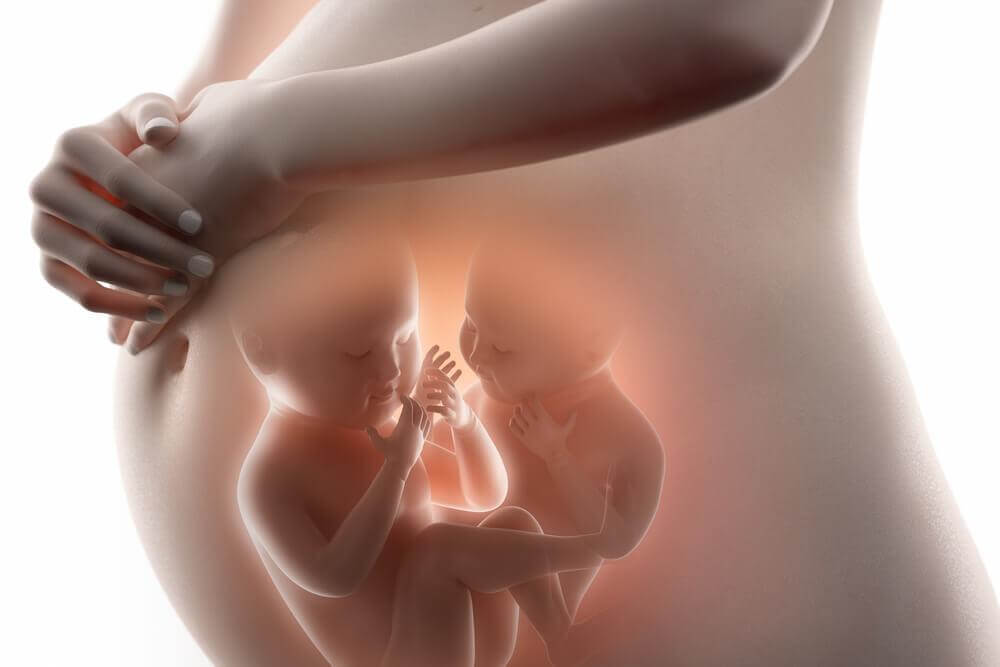 Many people want to have twins, mainly because they want to see their children grow up together while sharing wonderful moments as siblings. However, have you ever wondered what the difference is between identical and fraternal twins?

Although it may not seem so, the differences are key points to understanding and caring for them properly. For this reason, we invite you to continue reading if you want to know more about these distinctions.

It’s important to know the difference between identical and fraternal twins because the pregnancies should be treated differently in each case. Although most of these pregnancies are fairly typical, there’s a possibility that some complications might occur. For example, fetal fetus transfusion or intrauterine growth retardation are possible.

For this reason, in order to adequately manage a pregnancy with twins, it’s essential that know which type of pregnancy you have as soon as possible. In fact, according to the book Clinical Obstetrics by Drs. E. Albert Reece and John C. Hobbins, an ultrasound in the first trimester can identify whether your twins are identical or fraternal. Likewise, any possible fetal anomalies or other type of complication can be detected in time.

In order to identify what type of pregnancy you have, there are some factors that you should consider. They’re easy to understand, and will help you determine if you have identical or fraternal twins.

Discover: What Are the Different Types of Pregnancy?

Dizygotic twins, that is, fraternal twins, are those produced by the fertilization of two eggs and two sperm. At the time of fertilization, the ovaries release two eggs. Since men have millions of sperm, it’s normal for both to become fertilized.

In a pregnancy with fraternal twins, each fetus has its own amniotic sac and placenta. Therefore, they may or may not have the same sex, and their resemblance will be like that of two siblings born in different births.

On the other hand, monozygotic twins, that is, identical twins, are produced when a single egg is fertilized with a sperm. This forms a zygote, which then divides into two, developing two fetuses.

With identical twins, what happens is a “natural cloning.” Although each one develops independently, they are formed by the same egg and sperm. Therefore, they share the same genetic load and are physically almost identical.

Fraternal twins can be opposite sexes

It’s common that out of every 100 pregnancies of fraternal twins, 50 will be of different sexes. Likewise, the following study from the Institute of Psychiatry in the United Kingdom explains that the sex of twins is a factor that influences their development.

Monozygotic twins share the same hereditary material since both were born from the same fertilized egg that was divided in two after conception. Any difference that exists between them once they are born will be caused by external factors, like food and exercise.

Twins interact inside the uterus; that is, they instinctively seek each other out. Being inside the mother’s womb, they usually look for and touch the other more than themselves. From the time they’re inside their mother, they create an unbreakable bond.

In general, they develop as if they were facing one another. That is, one is the reflection of the other. So, if one is right-handed, the other will be left-handed. If one has a spot on the right arm, the other will have it exactly in the same place, but in the left arm.

Read this article: The Genetic Origin of Sex: the X and Y Sex Chromosomes

According to an article by a researcher at the University of the Republic, fraternal twins (coming from different eggs and sperm) only share 50% of their DNA and may even have different blood types. Therefore, they’re siblings born in the same birth without any other similarity.

Popular beliefs claim that the ability to have twins is hereditary. That is, if in the family there were cases of twins, some people believe that this skips two or three generations.

On the other hand, a 2006 study by Dr. Gary Steinman showed that consuming more milk products increases the chances of conceiving twins. This was determined after comparing the numbers of twins born to vegan mothers and mothers with normal diets.

Have you ever wondered what the differences are between twins and twins? We hope this information’s been useful to you; since the conception of two babies in the womb, at the beginning, can generate some confusion. Therefore, don’t hesitate to consult your gynecologist to clarify any doubts you may have.

Your Siblings, the Best Friends You Never Chose
The relationship you have with your siblings is a bond that can never be broken. Having brothers and sisters is very different from having friends. Read more »
Link copied!
Interesting Articles
Did you know?
New Year's Traditions Around the World