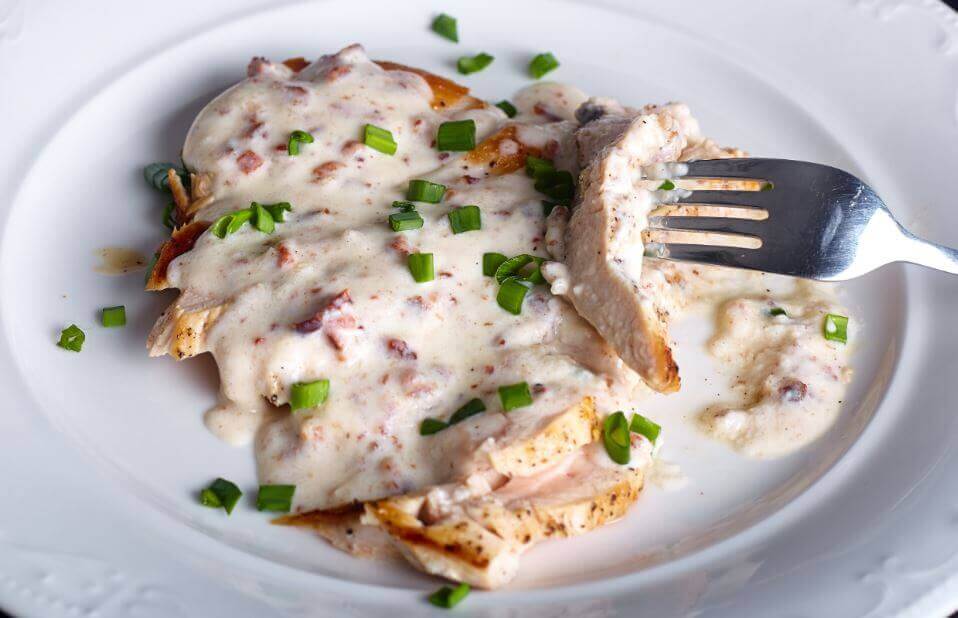 Chicken breasts are almost used in cooking all the time. It’s a lean and nutritious meat, which is why athletes and people who are trying to lose weight include it in their diet. In this article you can learn how to make a delicious chicken breasts with cheese sauce recipe.

The following ingredients will be enough to serve two people this chicken breasts with cheese sauce recipe:

This recipe is really very simple. First, cut the chicken breasts into bite-sized cubes, and season them with salt and pepper to taste. Then, heat some olive oil in a large pan at a high temperature.

The chicken pieces will probably have absorbed all of the oil in the pan, so add some more and cook over a low heat. While the oil is heating up, finely chop the onion and cut the garlic into thin slices. Add the onion to the pan and leave it for 10 to 15 minutes over a low heat until it turns golden and a little translucent.

Afterwards, add the garlic slices and cook them for just a few seconds. It’s really important you don’t add them at the same time as the onion, otherwise they’ll burn before the onion has cooked properly. Once the garlic has turned golden, add the cream and cheese, and add some additional salt.

Keep the heat on low and thoroughly stir everything to melt the cheese until it forms a homogeneous sauce that mixes well with the onion and garlic. The contrast in texture between the soft onion and the crispy fried garlic gives this recipe a really interesting touch. Finally, add the chicken pieces to the pan so they finish cooking in the sauce. Cook them for about 5 minutes, then the mixture is ready to serve.

Chicken fingers is a possible alternative recipe. In fact, this can be a fun substitute for any chicken recipe. You can even try chicken fingers in the recipe above. To make them you’ll just need:

First, cut the chicken breasts into finger width sized strips. Then, crush the garlic, parsley, paprika, with a pestle and mortar, and add some salt and olive oil.

Next, pour the mixture into a separate bowl, add the eggs, and beat them well. Add the chicken strips and move them around until they’re well coated in the mixture. Then, put the bowl in the fridge for 1 to 2 hours to soak in the mixture.

Once they’ve been in the fridge for a couple of hours, remove them from the fridge and roll each strip in breadcrumbs. Make sure the strips are completely covered. Heat a large amount of oil in a pan, add the strips, and cook them until they turn golden on the outside and are well cooked on the inside.

Finally, lay the strips on some kitchen paper to remove the excess oil. This way it’ll be much easier to dip the fingers in the cheese sauce. Try out these American-style chicken recipes and taste them for yourself!

Endive pomegranate salad is a dish that you can routinely include in your diet. It provides essential micronutrients, as well…