If you're craving a rich cream of asparagus soup with a twist, here are two yummy recipes that reinvent this dish. 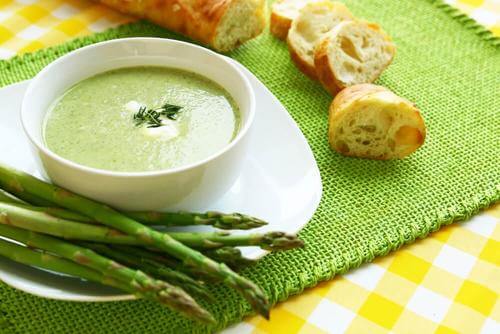 Asparagus is a food that was offered to Greek and Egyptian gods for thousands of years. Fortunately, its use spread to many more sectors of the population thanks to the Romans, who introduced it to all of Europe. Over time, people began to incorporate this vegetable more and more in their preparations. This is why we can enjoy many asparagus dishes today, like cream of asparagus soup.

The main asparagus producers in the world are Germany, Italy, and France. This tells us that those countries consume it the most, closely followed by Belgium, Spain, Portugal, and Turkey. In light of this, there are many cream of asparagus soup recipes and all of them are delectable.

In this article, we’ll discuss some of the best ones so you can make them and wow your guests!

Remember that asparagus contains several nutrients that keep you healthy.

For starters, they’re high in vitamins A, C, E, and K, folic acid, potassium, trace elements, fiber, and antioxidants. The action of these nutrients results in diuretic properties (which help the body release toxins), as well as anti-aging properties (they fight free radicals).

The following recipe is the most common cream of asparagus preparation that’s both familiar and really easy to make. And the best part of all is that you don’t need a lot of ingredients to make it nor special cooking techniques.

The amounts we specify below are for two people.

This cream of asparagus soup is a dish that can be enjoyed both as an appetizer or a light dinner. Everything will depend on your tastes. The important thing is to be careful with the cooking times and heat so the recipe comes out perfect.

Try these recipes and give them your own personal touch!